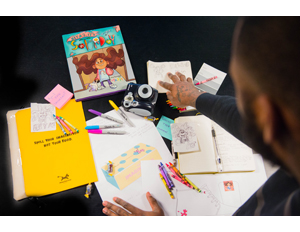 If you think the New England Patriots’ Martellus Bennett is all about football, think again. This gifted athlete is also an artist, animator, author, producer, composer, and CEO of Imagination Agency.

Martellus stopped by Black Enterprise to speak about his multimedia company and his off-season artistic work.

Where does your creative energy come from?

What is your company?

Imagination Agency. It’s a multimedia company. I like to [create] children’s books and animation, it brings families together.

And you were inspired to create the app by your daughter?

Her name is Austin Jett Rose. We call her Jett, and then A.J. are her initials. So I created the character A.J. and the design is based on her. The character’s attitude and personality are based on my daughter as well.

Does she help you with the creative process?

She’s only two, but she contributes. When I’m on my computer she sits on my lap and says, “Daddy, I’ll help.â€ She will point at things I make and say, “I like this one.â€ There are probably some things in [the book and app] which are purple, that shouldn’t be purple, but she loves purple.

Tell us about creating the app and the book.

I started downloading a bunch of children’s apps. I found this [development] company with a similar design style as I had in mind. I got in contact with them and hired them.

There are two A.J. books and apps coming out next year. The next one is Hey A.J., It’s Bedtime, and I’m pushing that even further, as far as creatively.

What’s the one piece of technology you can’t live without?

My Microsoft Surface Book. I can write on it, type on it; sketch something really quickly. It’s my number one device.