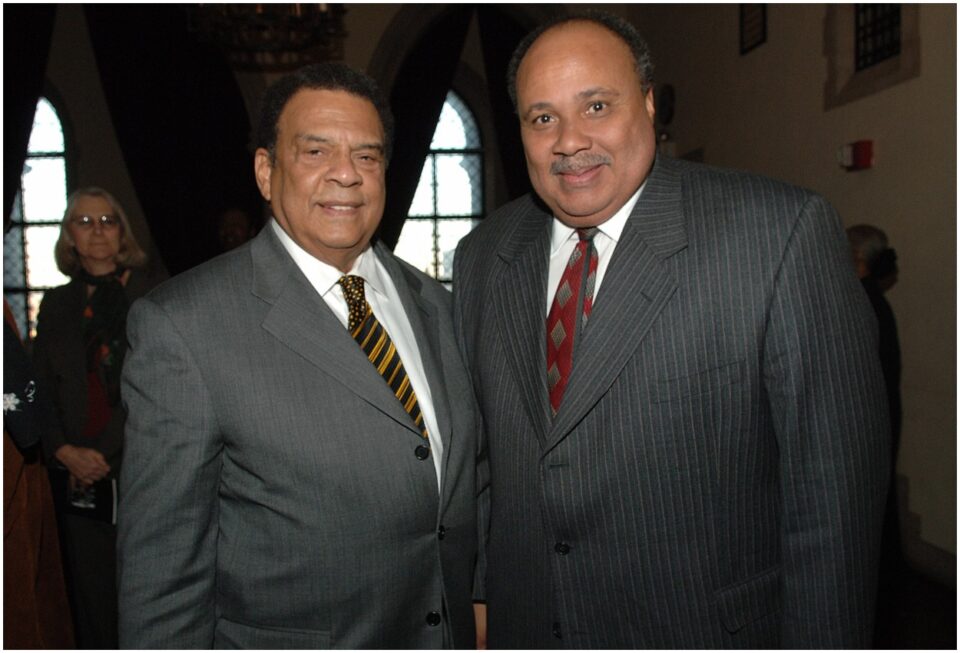 Dr. Martin Luther King, Jr., who was assassinated 54 years ago on Monday, visited Cleveland at least seven times the year before he was fatally shot on the balcony of a Memphis motel. Dr. King, who was in the Tennessee city advocating for fair wages for striking sanitation workers, was scheduled to return to Cleveland six days after his assassination.

During those Cleveland visits, Dr. King galvanized thousands of people to rallies and boycotts to improve conditions for Black residents and to drive voters to the polls to elect Carl Stokes, who became Cleveland’s first Black mayor and the first Black American to serve as mayor of a major city. His influence angered many who wanted to maintain the status quo and then Cleveland Mayor Ralph Locher even called him an extremist.

Today, officials of the Southern Christian Leaders Conference (SCLC) and The Black Contractors Group (BCG) announced that Dr. King’s eldest son, Martin Luther King III, and one of his top aides, former U.S. Ambassador Andrew Young, have joined the campaign for economic parity in Cleveland and is calling on The Sherwin-Williams Company to return to the negotiating table to resolve the 17-month long dispute with the BCG and SCLC.

In September 2020, Sherwin-Williams named an all-white, nine-member team of partners to build its new $600 million plus global headquarters in the city and a research and development center in nearby Brecksville. Saying that decision is unacceptable in the nation’s poorest big city which is 51 percent Black, the BCG and the SCLC have insisted that Sherwin-Williams names a Black partner to the team.

A Cleveland-based Black-owned firm was identified. All sides agreed to move forward but talks stalled and Sherwin-Williams has refused to explain why or return to the negotiating table.

King III believes his father’s dream of economic equality can be achieved in Cleveland just like the city lead the way politically when Stokes was elected the city’s mayor. That breakthrough led to African Americans being named mayors, members of congress, and even U.S. president.

“My father would be appalled by the conditions in Cleveland today,” King III said.

“While the city has made advances politically, it has failed its citizens in becoming the poorest big city in the nation. We must address the roots of this problem and that is why I am supporting the campaign for economic parity in Cleveland, which seeks to resolve these problems. It starts with all sides returning to the table to find a fair resolution.”

Ambassador Young, who also served in Congress representing the state of Georgia and two terms as mayor of Atlanta, is calling for Sherwin-Williams to meet again with the SCLC and the BCG to end the conflict, because he knows the value of true diversity, equity and inclusion. As an influencer from Atlanta, Young is credited with bringing the 1996 Olympics and many global corporations to Atlanta and the region, which has positioned Atlanta as a major U.S. hub.

“Our success is due to corporate leaders sitting at the table with community stakeholders,” Young said.

“At that table, they engage in the courageous conversations that remove the walls that divide them and pave the way for true understanding that leads to business growth and opportunities for all. I know what was achieved in the deep South can be achieved in Cleveland and the Midwest. Cleveland has no other choice but to galvanize all to the table if it seeks to rebound as a major destination for all Americans.”

Dr. Charles Steele, Jr., president and CEO of the SCLC, and Norm Edwards, president of the BCG, said this is a historic moment for the movement.

“They are known for fostering unity and understanding and resolving conflicts.”

Edwards added, “The movement is gaining national momentum from some very powerful leaders and influencers. It is time for our local leadership to step up and do what is right for all of the citizens of Cleveland. It will be a travesty if Sherwin-Williams builds an office tower with $300 million in tax breaks and incentives, which are public dollars, and no Black-owned firm was awarded a contract to serve as a senior manager to oversee the project as a key partner. My hope is we get this resolved now.”