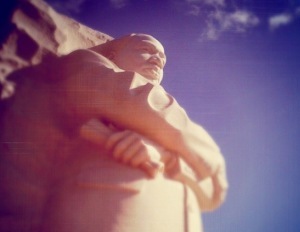 On Monday August 22, a powerful figure of American history was prodigiously cemented in world history at the grand unveiling of the long-awaited Martin Luther King, Jr. Memorial site. Press and camera crews from international and domestic media outlets descended upon the recently finished four-acre site located on the Washington, DC’s National Mall to witness the impact that one man’s dream has had on the world.

Five years ago the groundbreaking development was initiated, and just days before the 48th Anniversary of the March on Washington where Dr. King delivered his timeless, I Have a Dream speech, the dream of erecting a memorial in his honor became a reality. Although plans for President Obama, Alpha Phi Alpha Fraternity, Inc., and other stakeholders to officially dedicate the site at a ceremony on Sunday have been postponed due to the threat of hurricane Irene this weekend, BlackEnterprise.com was there to document the historical moment and to speak to some of the senior officials who had the important mission to complete this monumental project, which now stands as the first memorial in Washington, DC, dedicated to a person of color.

President of the Martin Luther King Memorial Foundation, Harry E. Johnson, Sr., who led the project and, from 2001-2004, served as president of Alpha Phi Alpha Fraternity, Inc—the Greek organization Dr. King was a member of—explained the mission of the memorial, the overall theme and the objective of the site’s positioning: “I’ve said time and time again, ‘location, location, location,’â€ said Johnson. “Its [location] creates a visual line of leadership between Lincoln and Jefferson Memorials with the Washington Monument.â€ Johnson also highlighted the importance of encompassing King’s ideology. “His vision of America is captured in his message of hope, and the possibility of future citizens dignity and mutual respect—a message that challenges each of us to recognize that America’s true strength lies in our diversity of talents.â€

That vision is displayed architecturally with a range of grace, humility and power that’s felt immediately when entering the site. Lisa Anders of McKissack & Mckissack and the senior project manager on-site briefly explained the logistics and the huge responsibility that she felt when appointed to her role. “It’s a four-acre site. We started construction in December of 2009 and we were completed in August, 2011,â€ she says of the task that took two years to physically complete. “I was overwhelmed at the opportunity. I was actually called by Deryl McKissack Â (President and CEO of McKissack & McKissack), to come and run this project, and for me that was a great testament to my previous work; but this memorial is very important to our country…

Designed by sculptor Master Lei Yixin and his team, 159 granite blocks create the memorial’s Mountain of Despair and Stone of Hope, which features a 30-foot sculpture of the late practitioner of civil disobedience, peering out proudly (if not defiantly) toward the landscape. The site also hosts 14 quotations from speeches, sermons and writings, and a contains a 2,871-square-foot bookstore.

There’s already been enormous commentary on the outcome of this six-year undertaking (like the fact that the organization has raised an impressive $114 million for the memorial, but is still short of its $120 million goal). But Deryl McKissack eloquently summarizes the project by saying, “The construction of this memorial was more of a movement, it’s something more than just us.â€