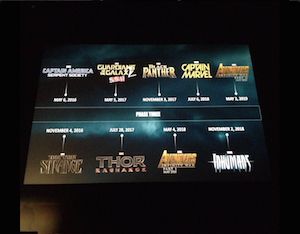 Yesterday was a great day for comic book and comic book movie fans, as Marvel Studios announced its upcoming slate of movies through 2019.

At the El Capitan Theater, the company unveiled the oft-talked about ‘Phase Three’ initiative, which spotlight films made after Avengers: Age of Ultron and Ant-Man. Those upcoming gaggle of films include two more Avengers films (split into the two-part Avengers: Infinity Wars), a third Thor film, a third Captain America movie (which will mark the Civil War angle), a sequel to Guardians of the Galaxy, and two solo films introducing two new characters to the Marvel Cinematic Universe.

The comic industry’s first African American character to lead its own series, T’Challa, also known as the Black Panther, will be played by actor Chadwick Boseman. Boseman, fresh off of his rousing success as playing James Brown in Tate Taylor’s Get On Up, will play the Wakandan ruler in a standalone film and make his introductory appearance in Captain America: Civil War. Captain Marvel, the first female superhero from Marvel to get her own movie, will also tantalize fans as the character Carol Danvers will finally get some shine time in her own movie.

The huge announcement set ripples through the internet as fans clamored for more. They were ultimately rewarded as a new scene from the upcoming Avengers: Age of Ultron was shown after an episode of ABC’s Agents of S.H.I.E.L.D.. Following Warner Bros.’ similar announcement of their movies through 2020, it seems that the gauntlet has been thrown down by Marvel Studios once again.

Below you can see all the release dates for the ‘Phase 3’ initiative:

Watch the highlights from the Marvel Entertainment event below: