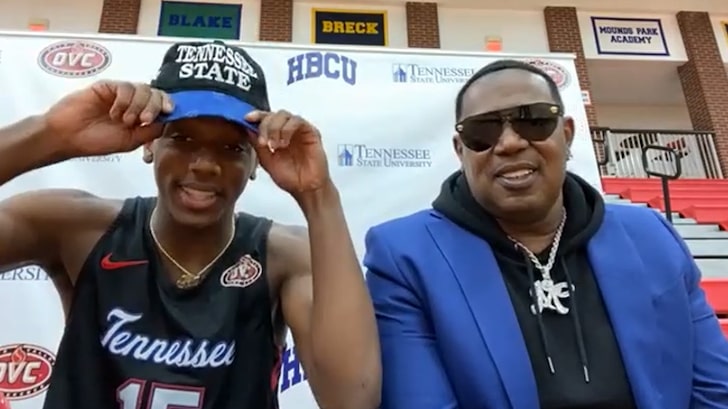 If it’s one thing Master P is going to do, it’s put on for the Black community.

Hercy Miller, a son of the multimillionaire rap mogul recently announced his decision to play basketball at the HBCU Tennessee State University after declining a number of scholarship offers from notable division one schools, including Vanderbilt, Louisiana State University, UCLA, and others,” The Tennessean reports.

Standing tall at 6-foot-3, Hercy Miller shared how he narrowed his choices down to TSU and Vanderbilt and decided on TSU due to a growing trend of high-profile high school athletes choosing HBCUs over more prominent colleges and universities. “I want to be a leader and a dream of mine and a goal of mine is to change the narrative,” Miller explained. “I want to show people you don’t have to go to one of these big schools, Power Five conference schools, just to be great. There are a lot of great people who came out of HBCUs or mid-major schools. I want to be the next one.”

Hercy pointed out the notable TSU alums including Oprah Winfrey, Portland Trailblazers player Rob Covington, and Memphis Grizzlies player Ja Morant. His father, Master P, shared how the decision was made solely by his son. “He had a lot of big schools on the table — Vanderbilt, LSU, USC, UCLA — and I said, ‘Son, this is all your decision; you’ve got to live with whatever you do,” Master P recalled. “I think this is bigger than just going to a school and bigger than basketball. What Hercy is doing is going to change the game and I think a lot of great players are going to want to go to HBCUs.”

The high school senior shared how TSU’s coach Brian Collins also motivated him to head to the HBCU. “That’s the thing that got my attention,” Hercy explained. “Because I feel like most people would have felt like, ‘Oh, he would never come here,’ but that’s not the case. With me, I don’t see a school as having to be big or whatever to have to be good.”

In addition to turning down Vanderbilt, UCLA, and LSU, Hercy also passed up offers from Missouri, South Carolina, Arizona, Georgetown, and a few other notable schools. “I feel like Hercy is going to bring the whole community together,” Master P said of his son’s potential at TSU. “Because we not only want to play basketball. My thing is about being a part of the community, helping the next generation, helping the elderly. Just being in that environment and saying, ‘How can we build something?'”