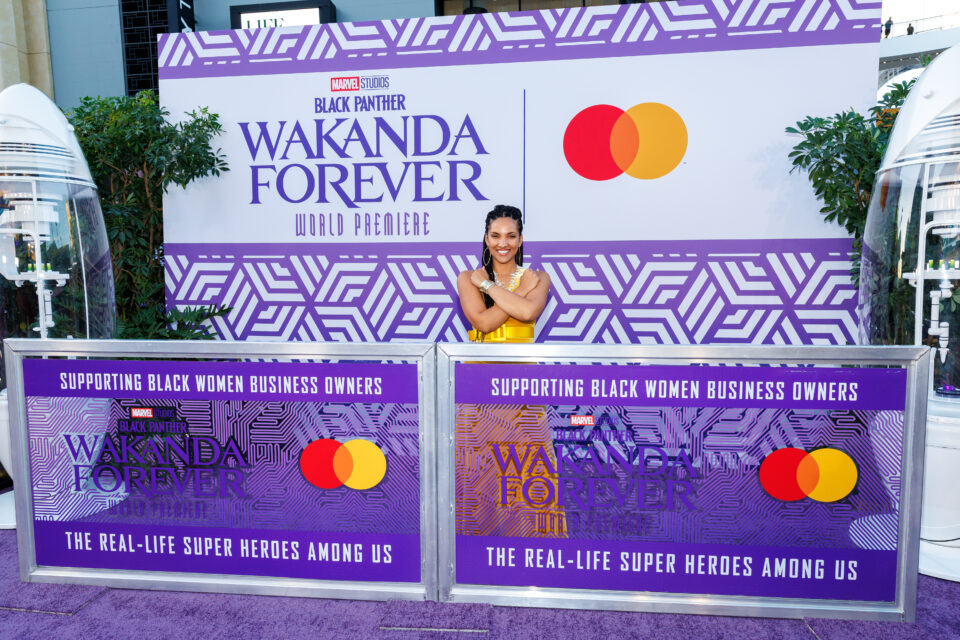 The Black Excellence was on full display at Marvel Studios’ Black Panther: Wakanda Forever premiere in Hollywood and BLACK ENTERPRISE was on the purple carpet to experience it all.

Otis, who serves as the face of Mastercard’s Wakanda-inspired commercial that is airing nationwide, enjoyed high-vibrational moments with some of Hollywood’s biggest stars all while promoting her bookstore that aims to empower the Flint community through literacy, programming, and culture-focused events that enrich and impact their lives.

“It’s been an honor to be part of this strivers initiative,” Otis tells BLACK ENTERPRISE.

“I feel very fortunate to be given a platform that Mastercard has created to amplify the various needs of Black woman business owners.”

Otis shared how “empowered” she feels by the initiative that has allowed her the opportunity to serve a heroic role in Mastercard’s new Marvel Studios’ Black Panther: Wakanda Forever commercial and enjoy guest appearances on Jennifer Hudson’s new talk show.

“I feel very empowered and just grateful for the overall experience so that I can hopefully become an example of the wonderful things that Mastercard is doing with their Strivers Initiative,” Otis says.

BLACK ENTERPRISE saw firsthand all the acclaimed Black talent, who stopped to take photos and show their support to Otis and Mastercard’s Strivers Initiative—Angela Bassett, Tyler Perry, Winston Duke, Boris Kodjoe, and more. The stars were shining on the red carpet and stopped to share a moment with the Black business owner on the red carpet.

The night concluded with a special screening of Marvel Studios’ Black Panther: Wakanda Forever that was attended by the entire cast and superstar Rihanna who debuted her song “Lift Me Up,” which serves as the main score for the new film.

The film serves as a beautiful tribute to the late Chadwick Boseman and the introduction to Wakanda’s new beginnings in wake of King T’Challa’s passing.