Matt Barnes Retracts Defense of Ime Udoka, Says 'He'll Be Lucky if He Coaches in the NBA Again' 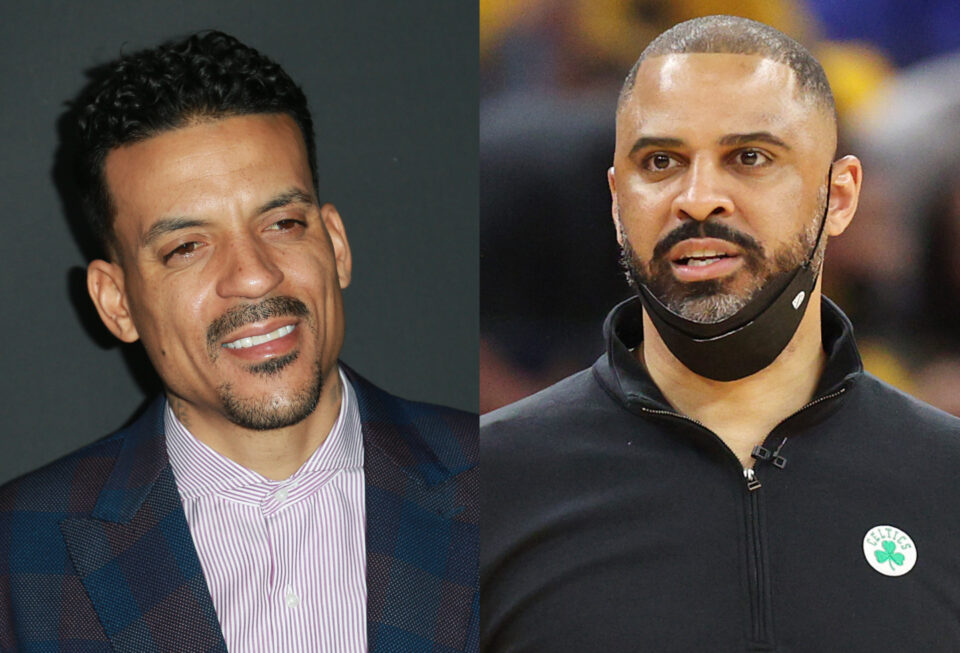 LOS ANGELES, CA - FEBRUARY 17: NBA player Matt Barnes attends GQ Celebrates The 2018 All-Stars In Los Angeles at Nomad Hotel Los Angeles on February 17, 2018 in Los Angeles, California. (Photo by Leon Bennett/Getty Images); SAN FRANCISCO, CALIFORNIA - JUNE 02: Head coach Ime Udoka of the Boston Celtics looks on during the second quarter against the Golden State Warriors in Game One of the 2022 NBA Finals at Chase Center on June 02, 2022 in San Francisco, California. NOTE TO USER: User expressly acknowledges and agrees that, by downloading and/or using this photograph, User is consenting to the terms and conditions of the Getty Images License Agreement. (Photo by Ezra Shaw/Getty Images)

The scandal surrounding the suspended Boston Celtics head coach, Ime Udoka, seemed like it would die down until at least the end of the upcoming season, but it appears to be picking up steam.

Some people had a lot to say about Udoka’s suspension. After initially defending the coach, former National Basketball Association (NBA) player, Matt Barnes, retracted his defense.

Reports surfaced that the head coach, who is Nia Long‘s fiancé, had an intimate, but consensual, relationship with a female Celtics staffer. Udoka’s alleged affair went against team policy and resulted in suspension from the upcoming NBA season.

Barnes went on social media to express his regret for blindly defending Udoka and speaking on the situation without knowing all the facts. The former NBA player deleted his original post defending the coach and explained his reason for erasing it.

“Last night, without knowing all the facts, I spoke on Ime Udoka’s defense and after finding out the facts after I spoke, I erased what I posted because this situation in Boston is deep, it’s messy, it’s 100 times uglier than any of us thought.”

“And, that’s why I erased what I said. Some things happened that I can’t condone, I can’t back, and it’s not my place to tell you what happened. If it ends up coming out, it ends up coming out. But that was the reason why I erased my post last night because after I posted it, I got a call from someone who ran all the details and s**t is deep. Praying for everybody involved, you know, I hope everyone gets through this.”

Matt Barnes on the situation with ime. He was told what happened and it sounds like it’s pretty bad. pic.twitter.com/PnMZzR2WsW

Barnes spoke to VLAD TV and also told the interviewer that if the whole truth is revealed publicly, he may never get the chance to coach in the NBA again.

Earlier this week, another former NBA player, Shaquille O’Neal, stated that he’d also stay out of commenting on Udoka’s personal affairs, albeit for a different reason.

On a recent episode of his weekly podcast, The Big Podcast with Shaq, O’Neal briefly spoke about why he feels he shouldn’t criticize Udoka.

According to Sportskeeda, O’Neal admitted to being a serial cheater.

O’Neal had this to say regarding the Udoka reporting: “I am going to step down from this conversation. I was a serial cheater.”

“It would be crazy and blasphemous for me to get up here and say, ‘Boom, boom, bam.’ I can’t do that. I know these guys personally. I know they’re going through a lot because I went through a lot.”