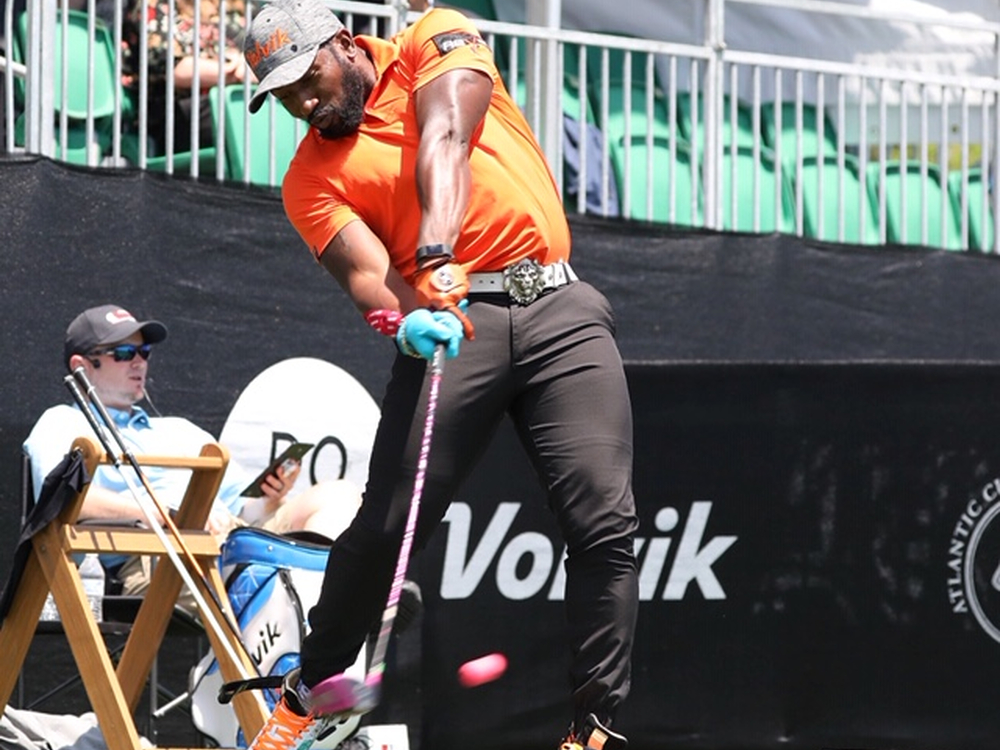 Golfer Maurice Allen is breaking records and making history the long way. A major contender in professional long-drive competitions, Allen is one of the world’s top long drivers who, in 2018, became the first African American to win the annual Volvik World Long Drive Championship with an impossible 393-yard drive.

The Pine Hills, Florida, native received his degree in biology from Florida A&M University in 2010 and soon after, moved to Atlanta to become a chiropractor. It was during this time that he perfected his craft, which enables him to hit a golf ball harder, faster, and farther than the competition.

BLACK ENTERPRISE had the opportunity to speak with Allen about diversity in golf, the challenges he faces, and his commitment to community.

BE: What drew you to the sport of long drive?

It was God’s ordained plan for my life. I was only weeks away from graduation at Florida A&M when I was introduced to the sport through a dare by my friend. There is a famous golf movie named Seven Days in Utopia, and in the movie, it states “You don’t choose the game, the game chooses you”. That was definitely the case with me because I didn’t know much nor care for the game of golf when I began in 2010.

BE: Did the lack of diversity in golf ever discourage you from playing?

The lack of diversity never discouraged me from participating on a professional level, but it certainly kept me from playing the game when I was introduced to it as a kid. As a child, my dad introduced me to the game but because of the lack of social acceptance in my age group, I never took it up nor took it seriously regardless of what talent I may have had. As a professional, I knew the lack of diversity meant the road was going to be hard and I had to be the best. I was fortunate to have an amazing list of mentors, that would prepare me for the journey. My coach was a part of the civil rights movement, and he explained to me how being successful and unapologetically black could close some doors in the golfing world. Conversely, he emphasized that the doors of inspiration that it could open would be priceless.

I come from greatness and feel obligated to continue the legacy my mother, former senior engineer for NASA, and my father, one of the top officials in Orange County (Orlando, Florida), set for me. They were able to prepare me with first-hand experiences of what discrimination looked like, along with the mental and emotional effects it could have on me as an athlete and person.

BE: What challenges have you faced because of the lack of diversity in golf?

Being the only black person at most of my competitions. My entire career, there has been constant ridicule, and negative things said about any and everything I do. From a partnership standpoint, the challenges continue with sponsorships. Even though my record is impeccable, I constantly have to prove my self because sponsors will choose my less talented white counterparts over me. I will continue to push the boundaries so the generations to come won’t have to fight this exact same fight in the future.

BE: How has the sport evolved and what do you see in the future for long driving?

The sport has grown significantly since the time I started with the biggest difference being the television coverage. The merger with Golf Channel created a larger audience, and other sports networks, like ESPN, have shown highlights, which increases exposure beyond golfers and golf enthusiasts. In the future, I believe Long Drive will continue to have global growth and possibly become an Olympic sport.

BE: What are you doing in your community to promote diversity in golf?

I am currently working with the Orlando Minority Youth Golf Association, which is an organization that was founded by my coach Dr. T.J. Dorsey. This organization was developed before “The First Tee” program, and it gives kids the opportunity to learn about the game of golf and themselves at the same time. The program has been around for almost 30 years and has helped countless juniors earn scholarships to play college golf, along with helping kids get academic scholarships.