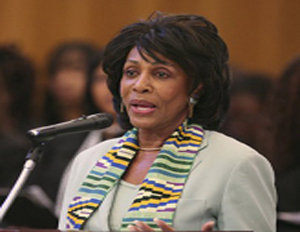 The House Ethics Committee may have been trying to investigate Democratic Rep. Maxine Waters, but now it seems they will be requiring additional investigations.

As pressure rises from allegations of probe irregularities, the Committee is forced to hire an additional attorney.Â  The Washington Post reports that Billy Martin, a prominent DC attorney, will be brought in as outside counsel as the investigation continues.

This news came shortly after the watchdog groups Citizens for Responsibility and Ethics in Washington voiced their concerns with the committee’s conduct to House Speaker John A. Boehner and Minority Leader Nancy Pelosi. The watchdog groups expressed their desire to see the case be handed over to an independent counsel on Monday.

John H. Johnson, the late entrepreneur and pioneering publisher of Ebony, Jet and other magazines, will be featured in the U.S. Postal Service’s Black Heritage stamp series in 2012.

Al Sharpton could be made MSNBC’s next host, TVNewser reports.

If true, this news is certain to raise eyebrows. Sharpton is, to say the least, a polarizing figure. Even so, he has not noticeably strayed from the standard MSNBC playbook during his guest-hosting stints.