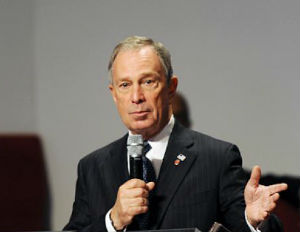 New York Mayor Michael Bloomberg’s legacy will go down in history as a billionaire philanthropist and business magnate. He is reportedly worth $31 billion and his namesake media company is the largest financial data provider in the world with projected revenues of $8.3 billion and profits of about $2.7 billion in 2013.

But one of the richest men in world is also known for being a politician (having served three consecutive terms as New York Mayor since first elected in 2001) who tried to run city government like a profitable corporation. As he leaves City Hall to return to Bloomberg LP in January 2014, he also will be leaving behind a questionable record in terms of a commitment to increasing minority contracting.

Among the Bloomberg Administration’s enterprising efforts has been to get more women- and minority-owned firms a bigger share of city contracts. However, targets have not been met, reports CityLimits.org. In 2003, Mayor Bloomberg issued an executive order to restart the city’s Minority- and Women-Owned Business Enterprise Program (M/WBE) after a decade-long absence, amid a push to diversify the pool of businesses receiving contracts to handle city services.

Ten years later, through a review of contract data, city documents and transcripts, as well as dozens of interviews with interested parties, CityLimits’ latest investigation suggests the program–admittedly a tiny piece of the city that Bloomberg will hand over to a new administration in January–was never a priority for the administration. Minority- and woman-led firms faced obstacles in qualifying for the work. And the law that created the program in 2005, as well as an amended version passed early this year, is full of contradictions and questionable numbers. The latest findings in a three-part series, The Color of Contracts: New York’s MWBE Program, also show:

1. In the last five years, the agencies under control of the mayor have fallen short of every goal established by the law for prime contracts.

2. Minority- and women-owned businesses are hampered by complicated procurement rules or their limited size compared to bigger firms.

3. The state often does not release detailed statistics on what types of companies received the $1.4 billion in M/WBE contracting.

In the early years of the program, the city focused on outreach and certification–merely getting M/WBE firms to sign up and demonstrate that they qualify for city work. ‘

“Under Mayor Bloomberg, the city has increased the number of certified firms from 700 to more than 3,800, and SBS continues to work hard to encourage more firms to certify and enroll in the city’s M/WBE program because a robust supply chain of competitive bidders is essential to the program’s success,” wrote Anne Rascon, deputy commissioner at the Department of Small Business Services, in response to questions about the program.

According to part-two of the series, several certified business owners reported having problems getting city jobs because of obstacles like surety bonding (insurance that protects the customer if a contractor fails to complete a job), lack of access to capital, insurance and lack of union affiliation. Many complained the city was still not doing enough to help and that the classes are at inconvenient times far away in Manhattan.

Moreover, part-three reports cities and states that want to diversify their contractor pool have to prove genuine disparities exist between the utilization of minority- or women-owned companies and the number of such companies capable and willing to do the work. The disparity cannot be based solely on population statistics. Also, the programs need to have specific goals.