Mayweather v. Pacquiao: All Aboard The Money Train 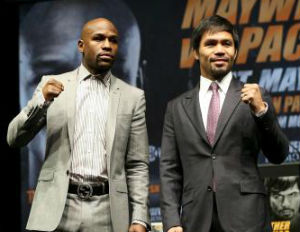 Tomorrow night, the event that boxing fans have been waiting years for finally takes place at the MGM Grand in Las Vegas. Floyd Mayweather, Jr. – the undefeated, 5 division 10 time world champion, reigning ESPY Fighter of the Year, former Black Enterprise cover boy, and pound for pound best fighter in the world – will finally step into the ring against Manny Pacquiao – the first and only 8 division 10 time world champion, former ESPY Fighter of the Year, reigning Fighter of the Decade, and WBO welterweight champion; and did I mention Filipino Congressman, actor, and basketball player? Needless to say these guys are laying a lot on the line.

The stakes for these two fighters have never been higher – with Floyd facing perhaps his best competition in years, and Manny Pacquiao looking to regain form and perhaps overtake Mayweather as the pound for pound best fighter in the world. Beyond jockeying for position, battling for a title, and solidifying legacies – there’s a lot (read: up to $400 million) of money surrounding this fight. If that sounds like a staggering amount of money, that’s because it’s potentially the highest grossing fight in history. Â According to TIME Magazine, which has developed a chart comparing the ‘revenue per day’ of some of the world’s most lucrative sporting events, this Mayweather v. Pacquiao fight will be number two, right behind Super Bowl XLVIII – which brought in $500 million.

We’ve detailed again and again the way that “Moneyâ€ Mayweather operates his empire and maximizes his profits and investments, to great effect – he’s topped Forbes’ list of highest paid athletes for the last 3 years – but the amount he stands to make from this fight is unheard of.

First off, there’s the contractual 60-40 money split of the fight, which the NY Times is estimating to reach $130 million (that’s the foreign broadcast rights, closed-circuit income from bars and theaters, ticket sales, sponsorships, merchandise sales, etc.). Two world class boxers like Mayweather and Pacquiao know how to draw a crowd – tickets to the fight, which sold out minutes after they were released, went for up to $7,500 initially; reportedly those same tickets have received offers for up to $141,000 in the online resale market. ESPN has detailed some of the record breaking sponsorship deals leading up to the event, noting that “exact records have not been kept, but the previous sponsorship record is believed to be the estimated $3.5 million to $4 million brought in by some past Mayweather bouts.â€ Saturday’s fight will bring in a record $13.2 million from sponsors like Tecate, Nike, Paramount Pictures, and the Mexican Tourism Board. Reportedly Manny Pacquaio’s shorts alone will carry sponsorships worth approximately $2.3 million, generated by six brands.

That’s only the beginning – next there’s the massive pay-per-view broadcast revenue stream. At a suggested price of $89.95, estimates are that the fight will be purchased by more than three million subscribers, which puts the revenue stream at roughly $270 million. After everyone has taken their cut – HBO & Showtime, the MGM Grand, etc – the two fighters still stand to make over $100 million each.

Speaking to the NY Times about the significance of this fight, Ken Hershman, the president of HBO Sports, said”This is a unique situation, the confluence of time and event – the two biggest fighters in the world coming together.â€

Mayweather and Pacquiao step into the ring tomorrow night – if you don’t have tickets already, order your pay-per-view now.