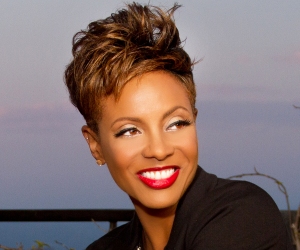 Legendary is one of those words that is thrown around too often and it has, somehow, cheapened the meaning since it’s been used too many times to describe many people who haven’t earned that description. In the case of Lana Moorer, well, you may know her as MC Lyte, it is a title well-earned. She has enough accolades and has done so much in 25 years, that it would be an injustice if that word wasn’t used when speaking of her.

From the heart of Brooklyn, Lyte The Emcee, who ‘Crammed to Understand’ Sam’s crack addiction on her debut album, Lyte as a Rock. Then needed a ‘Ruffneck’ on her fourth album, Act Like You Know, to earn her first gold album; Lyte rose to become an artist in every sense of the word as she is also an actress, author, record executive, speaker, philanthropist and at the rate she is going, will be adding other titles to her name.

She has shown through her longevity in this industry that you have to know what you’re doing in order to thrive and still be taken serious. Who knew 25 years ago that her talent would lead to her being the entrepreneur she has become?

As one of her Brooklyn brethren, Jay-Z, once said, ‘I’m a business man.’ MC Lyte has proven that she is a business and just like her book of the same title, she is ‘Unstoppable.’

BlackEnterprise.com: Do you ever sleep?

After being in this industry for over 25 years, it seems like you’re working more now than you were as a young rapper. How do you keep up with yourself?

LOL. I guess my need to create and inspire others ignites a fire that won’t let me stop. On top of that, I’m enjoying myself so it never really feels like work. I’m doing what I love and making a living out of it all.

You are involved with several organizations, like Hip Hop Sisters Network, along with a few others, would you like to tell us what this is and what your role is?

I’m the founder/CEO of Hip Hop Sisters Network. There’s a non-profit side and there’s also a for profit side. It was my dream to help empower young girls and women who are influenced by Hip Hop music.

A little known fact, in June of 2011, you became the first African-American female president of the LA Chapter of the Grammy organization, how did that come about and what are some of your duties?

I served in the room on the Governor’s board as an advisory board member the year prior. I spoke up and contributed. Later I was asked if I was interested in running and I jumped at the opportunity with the intention of making a difference. It was very important for me to represent the diversity that can and does exist within the academy.

You currently have a book out, ‘Unstoppable,’ as it’s apparent, you are! What is the book about and what made you decide to add author to one of your many titles?

Thank you Ced. I thought it was necessary to put all of what has helped me persevere throughout my career in written form. My hopes are that others may read and become inspired by my experience.

More than 25 years later, did you ever imagine accomplishing all that you have thus far?

Nope. Just was in it to express myself and have a good time.

And I am sure, you are nowhere near being finished, what is in the works for MC Lyte?

Yikes. Too much to talk about, but I will say, I’m in the middle of building an enterprise and excited to still be in the field of entertainment.

Well, aligning with the right team of folks is of great importance. Surrounding myself with people who are experts in their given fields. It also takes a dream and vision and lots of discipline. Getting rid of distractions is a must.

You’re a rapper, actress, music executive. You do voiceovers, you’re a DJ, host, public speaker, I mean, you’ve done so much, you continue to do more. How many other titles would you like to add to the legend we know as Lyte The Emcee?

TV producer, maybe film producer. I’m about to pen my memoir so I’m excited about that as well.

Recently, you announced a new $100,000 hip-hop scholarship partnership with the University of Wisconsin-Madison through your organization, Hip Hop Sisters Foundation. How did that come about and what are the future plans with the partnership?

The president of HHSF contacted WU and began a string of communications that led us here to this very space. I’m ecstatic about sending someone to school. It’s a dream made into reality.

What advice would you give to anyone hoping to have a successful career as you have had?

Know your business from the get go. The ins and outs of what it is you want and don’t want. Stay focused and learn the skill set that will take you to the top!

One last question, what ever happened to that good looking guy that starred in your very first video, ‘Paper Thin?’

I believe he’s some world renowned journalist or something…LOL