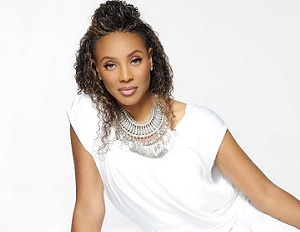 MC Lyte is unquestionably one of the greatest female rappers to ever pick up a microphone, and she’s long been considered one of hip-hop’s pioneer feminists.

Today, the Brooklyn native has taken her feminism and female empowerment movement to new heights with The W.E.A.L.T.H Experience, which stands for “womanhood, expansion, assets, leadership, transformation, and health.” Enjoy a women’s retreat focused on defining and reflecting on your goals andÂ re-energizing your mind and spirit through a variety of workshops and events. The three-day affair aims to teach women how to master their personal, business and financial objectives, leaving them feeling empowered, inspired, and equipped with strategies and information to help achieve their dreams. This year’s retreat will take place January 5—8, 2017, in Miami, with all proceeds going to Lyte’s #EducateOURmen foundation.

I recently talked to Lyte about The W.E.A.L.T.H. Experience and the #EducateOURmen foundation, which awards two $50,000 scholarships to men of color each year. We also discussed whether there’s a lack of women representing in hip-hop and Kanye West’s recent visit with President-elect Donald Trump.

On What She Hopes Women Will Take Away From The W.E.A.L.T.H. Experience and This Year’s Speakers:

“I’d like it to be a life altering experience, where they take away points that they can use throughout the rest of their life.

It is a group of women, who sit on a board making the decision to leave a lasting impression, and determine what aligns with the mission of The W.E.A.L.T.H. We aim to address many topics throughout the course of the three-days, and so we just want to make sure that whoever we have speaking is going to hit and be impactful.”

“It’s important because, with everything that’s happening with the world, we need to give a lot of thought, give a lot of support, to our young men, who are faced with challenges of really staying alive every day, depending on where you live and where you’re from. Unfortunately, to really make make something of your life— not for all, but for the majority—not only does it take education, but it takes degrees. Of course, along with that experience, I think that it’s important for hip-hop sisters to show their support for African American men and also to HBCUs. Our partnership is with Dillard, [a New Orleans-based HBCU], gives opportunities to young men to further their education. “

On the Importance of Instilling Hope in Women and African Americans That Currently Feel Hopeless, Due to the Current State of Affairs in This Country:

“This conference is really about having wealth in every area of your life, and providing the wellness to have women feel better. Although there may be some women that come there feeling hopeless, that is not how we want them to leave. It’s about filling them up with what they need to feel well, because we also know that the woman is the nurturer, and if she’s good, then nine times out of 10, the family will be good–the community will be good.”

On Kanye West’s RecentÂ  Visit with Donald Trump, and the Significance of Having a Direct Line of Communication With Our Future President, If We Truly Want Change:

“Absolutely, I think that’s important;Â  I think that’s wise of him to go sit with him [Trump]. I mean, the thing is, in order to get anything done, you got to go talk. I don’t know how it was for Martin Luther King going up in there in the White House, trying to work out all of those deals during the unrest that was happening in our communities. So yes, I think it was wise of him to go there and sit with him, and we’ll see what comes of it.”

On Females in Hip-hop, and Remy Ma Being the Only Female Artist Nominated for a Grammy:Â

“I think the state of female hip-hop is very much alive and still in existence. It’s just all about us spreading the word about those who are really out there doing what they do and loving it, but not in the view of mainstream. And I think that’s what people tend to equate success with is like okay, if we don’t see six female rappers being nominated or in mainstreamÂ on magazines, on radio, then they must not exist–and that’s certainly not true. There are so many of them out there–big ups to Rapsody, as a matter of fact.”

As for Lyte’s own recording career, the timeless artist of 46-year-oldÂ  is always releasing new music through her MC Lyte app. Her new album, Spotlight, will drop early in 2017; the project features Dave Hollister, V. Bozeman, and Lil Mama.

The W.E.A.L.T.H. Experience will take place at 1 Hotel South Beach, Miami. The retreat will feature Faith Evans, Kelly Price, Nicci Gilbert, and Erica Campbell, among others. Residents of Miami can attend on a day pass by visiting the website for more information by clicking here.