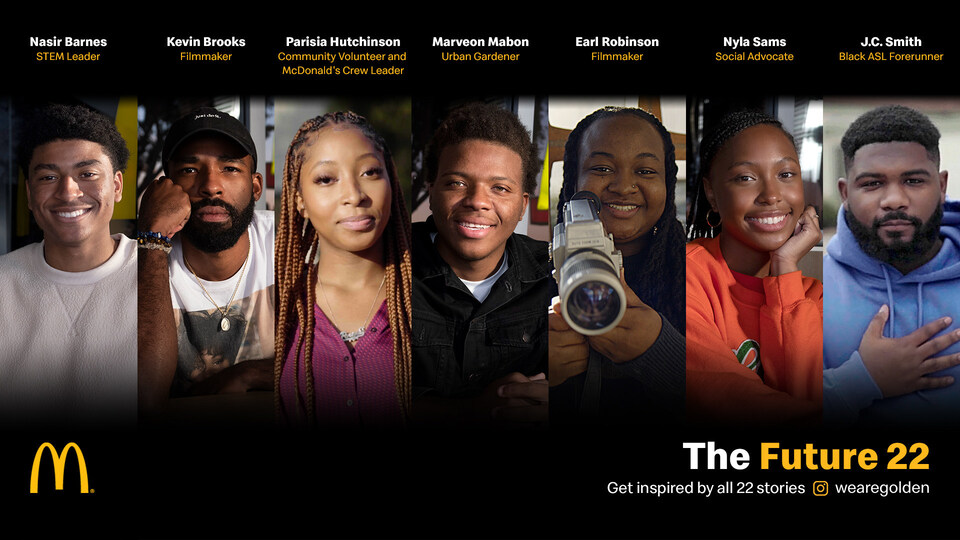 McDonald’s has launched “Future 22,” a new creative campaign that celebrates the work of 22 young, gifted and Black leaders whose passion and talent are creating meaningful change in communities across the country.

The integrated campaign starts today and will run through summer, featuring TV and radio spots voiced over by award-winning actress, singer, and entertainer, Keke Palmer.

McDonald’s Future 22 campaign is elevating the unique stories of 22 Black heroes and the impact they are having on their communities, according to a press release. From a bold preservationist of Black American Sign Language to a multi-faceted tutor for underserved children who is also a McDonald’s Crew Leader, and an award-winning filmmaker whose keen eye for storytelling helped create the Future 22 TV spot, the Future 22 are a group of visionary game-changers who are shattering ceilings to create a better future.

Through June, McDonald’s will release original content to tell Future 22 stories and feed and foster these young leaders’ drive by amplifying their voices, underscoring that Black history deserves to be celebrated beyond February. Campaign highlights include national TV and radio spots, digital content across multiple platforms and video profiles of the Future 22 on Instagram. McDonald’s worked with marketing and communications agency, Burrell Communications, to bring this campaign to life.

“The Future 22 is a group of young leaders whose commitment to community inspired this campaign. We couldn’t be more excited to celebrate them as they strive to make the world better, one community at a time,” says Elizabeth Campbell, Senior Director of Cultural Engagement.

“Through this campaign, we hope to inspire others to use their talent and passions to blaze trails and make a meaningful and positive mark on this world.”

Palmer, whose story of triumph, resilience, and commitment to community resembles those of the Future 22, narrates Future 22 TV and radio spots and gives voice to each person’s story on McDonald’s YouTube channel.

“I am thrilled to work with McDonald’s to honor these heroic young people who are doing extraordinary things in their communities,” says Keke Palmer.

“They are standing on the shoulders of the giants who stood before them to chart dynamic, new paths and I am excited to let the world know about them and their causes.”

“It’s so special to direct this commercial that celebrates young Black leaders who are creating the change they want to see,” says Brooks.

“As a kid, I dreamed of creating impactful and purposeful work, and to be recognized as a gamechanger by McDonald’s, while directing the spot, is an opportunity of a lifetime and a big deal. For me, it’s Black history.”

The initial seven Future 22 stories include:

— Nasir Barnes from Deerfield, MA, is a student at Morehouse College in Atlanta, GA, who mentors music students in his hometown while creating a robotics course to introduce and encourage underserved children to pursue careers in STEM

— Kevin Brooks from Memphis, TN, is a University of Memphis graduate expert storyteller, and award-winning filmmaker who is bringing positive stories of Black culture to light to help pull society forward

— Parisia Hutchinson from Newburgh, NY, is a student at Howard University in Washington, D.C, who in addition to being a McDonald’s Crew Leader, is committed to spreading joy and giving back to people who need it most by feeding the homeless, coordinating a prom for senior citizens, tutoring children and planning indoor activities for children with sun sensitivities

— Marveon Mabon from Watts, CA, is a student at Morehouse College in Atlanta, GA, and is teaching kids about healthy food options by building community gardens, which also serve as safe spaces for neighborhood kids and a homebase for his anti-bullying program

— Earl Robinson from Richmond, VA, is a student at Winston-Salem State University in Winston Salem, NC, who is a content creator dismantling stereotypes and uplifting the Black community through a documentary he created and a scholarship listing company he founded, ERScholars LLC, to help other students fund their academic dreams

— Nyla Sams from Long Island, NY, is a student at Florida A&M University in Tallahassee, FL, works with the National Black Justice Coalition to improve the quality of life for LGBTQ+ students at HBCUs through speaking engagements, TEDTalks, and more

— J.C. Smith from Jackson, MS, is a student at Gallaudet University for the deaf in Washington, D.C. and Black American Sign Language preservationist, whose bold actions advance equity among the deaf community and ensure the rich history and culture of Black vernacular are captured through sign

“I am so proud to be recognized as a part of this very special group of Future 22 members while I work at McDonald’s and pursue my dream of becoming a teacher,” said Parisia Hutchinson.

“I do what I do because I love people and my community, so big thanks to McDonald’s for showing me and others love who are out here grinding.”

Celebrating Black History during February and beyond is one of the many ways McDonald’s serves its communities, customers, and crew. Additional efforts include the Black & Positively Golden Scholarship Program, which provides financial resources to HBCU students; the Black & Positively Golden Mentors Program, which has paired industry leaders with up-and-coming changemakers in the same fields; support of the Boys & Girls Club of America’s diplomas2Degrees program which familiarizes teens with post-secondary education opportunities; and the Archways to Opportunity program, which provides educational resources to eligible crew at participating U.S. restaurants.

Together, with its owner/operators, McDonald’s is feeding and fostering its communities.