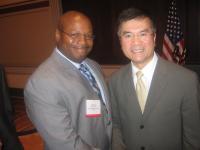 Lenny Johnson traveled from Buffalo, New York to be in the nation’s capital this week. In 10 years, he took L & D Plumbing & Heating “from a basement” to Â a $3 million commercial contractor. For his efforts, Â Johnson has earned honors as one of 10 regional minority small business people of the year.

Sundra L. Ryce, president and CEO of SLR Contracting & Service Company Inc., transformed her enterprise into a $20 million construction powerhouse over the past 13 years. Her company recently graduated from the SBA’s 8(a) set-aside program and continues its double-digit expansion. As a result, SLR is the 8(a) Graduate Firm of the Year. “I was in Black Enterprise several years ago,” she told me. “Next year, I plan to see my company among the BE 100s.” 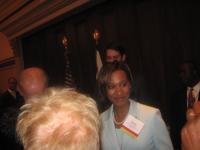 Johnson and Ryce were two of 14 honorees I met at a White House reception on Wednesday that kicked off the Minority Enterprise Development Week Conference. Better know as MED Week and hosted by the Minority Business Development Agency, the three-day event is designed to celebrate entrepreneurial achievement, provide minority entrepreneurs with strategies to grow their businesses, and create access to networking opportunities that may lead to business partnerships.

The reception, which recognized a mix of entrepreneurs, small business advocates and government officials, was also used to communicate that minority business was considered a vital component of the U.S. economy at the highest levels of the Obama Administration. Vice President Joseph Biden, Commerce Secretary Gary Locke, SBA Administrator Karen Mills and recently-installed MBDA National Director David Hinson spoke at the event.