(When I shared my entrepreneurial adventures as a the owner of a comic book company with Vice President, Biden he jokingly responded: “I know about superheroes. There’s Batman…and I’m Robin.”) 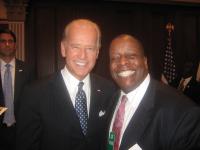 Biden noted that it was symbolic that an event honoring minority business achievement was being held on the day that the nation mourned the death of Sen. Ted Kennedy. He said the revered “Lion of the Senate” spent his 46 years in Congress fighting for those denied access to opportunity through discriminatory practices.

Surrounded by an enthusiastic crowd and flashing bulbs from digital cameras, Biden made the connection between Kennedy’s commitment to service and entrepreneurial drive to build a business. “He believed in something that I’m sure all of you do: possibilities,” he asserts. “In fulfilling his service, he never explained and never complained. He was always reaching back. He measured his success by how many people he can help.” I found out, during the course of the event, that most of these successful business owners were involved in community service or mentored other entrepreneurs.

But the business-battering challenges that the nation’s 4 million minority companies have faced over the past year was not lost on Locke. He maintained that they “bore the brunt of the economy.” Locke, along with Hinson and Mills, shared a commitment to ensure that minority firms gain access to financing in a tight credit market as well as access to contracts through the American Recovery and Reinvestment Act. In fact, Mills maintained 13 percent of such contracts have been awarded to minority firms thus far.

Biden said that “when your kids reach your age then 53 percent of the population will be comprised of minorities. The world has fundamentally changed. We can have a negative outcome or we can have a positive outcome. We need more middle-class Americans. If you don’t grow (your business), it will not happen.”

Hinson maintained that “minority business is a central part of the U.S. economy” needed for Â job creation and commercial innovation. Over the next two days, these entrepreneurs will attend panels and sessions–in fact, I’m moderating one on Thursday morning–to achieve that goal. If they possess the same drive as Johnson, Ryce and the other awardees that mission will be accomplished.

Derek T. Dingle is the editor-in-chief of Black Enterprise Magazine.