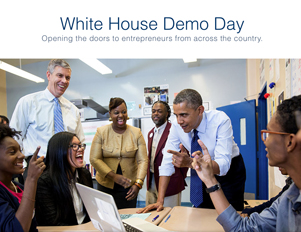 At the first White House demo day, held on August 4, the makeup of the exhibitors was quite different from what one might see at the typical demonstration for venture capital in Silicon Valley. Of the 32 companies that exhibited that day, 24 of them were founded or co-founded by women, and eight of them were founded by African Americans. Obama met the startups and gave remarks about the need to give more entrepreneurs from all walks of life a chance to turn their ideas into indispensable products and services. In line with the topic of diversity, several venture capital companies pledged to make diversity a priority in their business interactions. One in particular, the National Venture Capital Association promised to advance opportunities for women and underrepresented minorities.

Twenty-nine U.S. schools also committed to actions that will expand innovation and entrepreneurship education offerings in order to enhance the economic potential of colleges and universities and better prepare students to create products that benefit humankind. In addition to the companies that exhibited, Kimberly Bryant, founder of Black Girls Code was honored.

The event was groundbreaking because it showed that women and black founders are capable of building successful, high growth tech startups, and it demonstrated how the tech industry is capable of uplifting the unemployed and underemployed. For example, Jerome Hardaway launched FRAGO, a nonprofit startup that helps U.S. military veterans transition back into civilian life.

“Web development saved my life,â€ Hardaway told Megan Smith, U.S. Chief Technology Officer and Daymond John, FUBU founder and venture capitalist, at the Demo Day. “When I was coming from the military in 2009, it was a horrible transition. The only thing that helped me land my first job was learning front end web development. Now I’m giving back, helping veterans learn how to code at zero cost to them.â€

Take a look at eight of the companies who have at least one black founder. Send them a message of support on Twitter.

Partpic combines image recognition and machine learning technologies to transform the industrial supply industry, a $570 billion annual market worldwide. Traditionally, finding a replacement part requires a lengthy process of serial number verification and supplier communication.Â  With Partpic, customers simply snap a picture of the part they want to replace and automatically receive product name, specifications, and supplier information. Partpic is an Atlanta-based startup that recently closed a $1.5M seed round including investments from Steve Case’s Rise of the Rest and Comcast Ventures. Jewel Burks leads the Partpic team as co-founder and CEO, and additionally serves as an Entrepreneur in Residence at Google. Partpic’s leadership team also includes former Googler, Jason Crain as co-founder/COO.

As a child, Pashon Murray was inspired by her father’s founding of a waste hauling company. In 2011, Murray founded Detroit Dirt, a business that collects food waste from companies, including General Motors, Blue Cross Blue Shield, and the Detroit Zoo, and transforms it into rich soil. Using advanced composting techniques, Detroit Dirt helps companies regenerate their waste into resources that will educate the community, create jobs, and provide gardeners rich, life-bearing soil. Last year, Murray was named a fellow at MIT, where she studies the science of composting and waste reduction.

After serving time in prison for a non-violent drug offense, Frederick Hutson knows how important family support is on the path to recovery. He founded Pigeonly to make a positive impact on the lives of inmates by creating solutions for people who want to stay in touch with loved ones in prison. Pigeonly products include Fotopigeon (an easy way to send printed photos by phone) and Telepigeon (a low cost option for phone calls). Though still young, the 25-person company has shipped over one million photos and processed over 8 million phone minutes. Pigeonly is a graduate of NewME Accelerator and Y Combinator and has raised $5 million in funding.