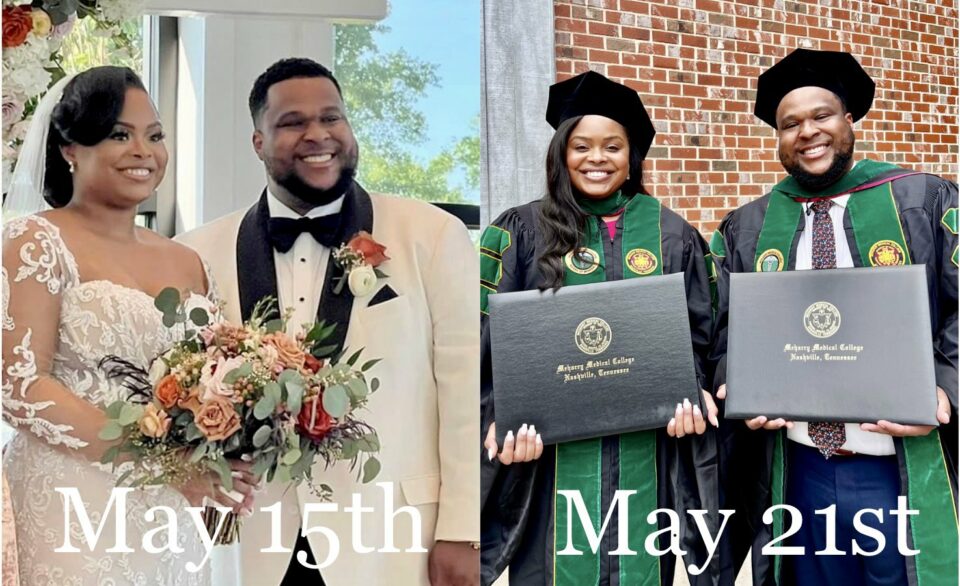 This newly married couple are celebrating two special milestones—becoming doctors and the beginning of a long-lasting future together.

On May 21, Dwight Johnson II and Taylor Brooks graduated from Meharry Medical College, an HBCU in Nashville. Six days before that, the pair expressed their love, promise, and commitment to one other at their wedding in Tomball, Texas. Now, they are reintroduced as Drs. Johnson and Johnson.

Dwight received his doctor of medicine degree in obstetrics and gynecology, while Taylor graduated a physician of psychiatry.

On May 22, Dwight posted two adorable side-by-side photos on Twitter of both his graduation and wedding day with his wife.

“So much to be thankful for in this past week,” Dwight wrote. “I was able to marry my best friend and then graduate as physicians together just 6 days later. God is so good. This is what #BlackLove mixed with #BlackExcellence looks like when you always keep God at the center of your life.”

When you get married and graduate medschool the same week 🙌🏾 🙌🏾
This is what #BlackLove mixed with #BlackExcellence looks like. #MedTwitter #BlackTwitter #ToGodBeTheGlory pic.twitter.com/nR8uNkrYVc

The couple met at school through a mutual friend, according to the couple’s wedding registry. Dwight was instantly drawn to Taylor’s beauty and kindness. From conversations in the school library to an official date of dinner and bowling, Dwight mustered the courage to make her his girlfriend and ask her out to the med school prom. He won her over with the Love and Basketball approach with ping-pong to ask her to Cadaver Ball, and had the DJ play “Differences” by Ginuwine to set the mood while he asked her out.

The new graduates will continue their incredible medical journey with residencies. Taylor matched with the University of Maryland and Dwight matched with Howard University College of Medicine