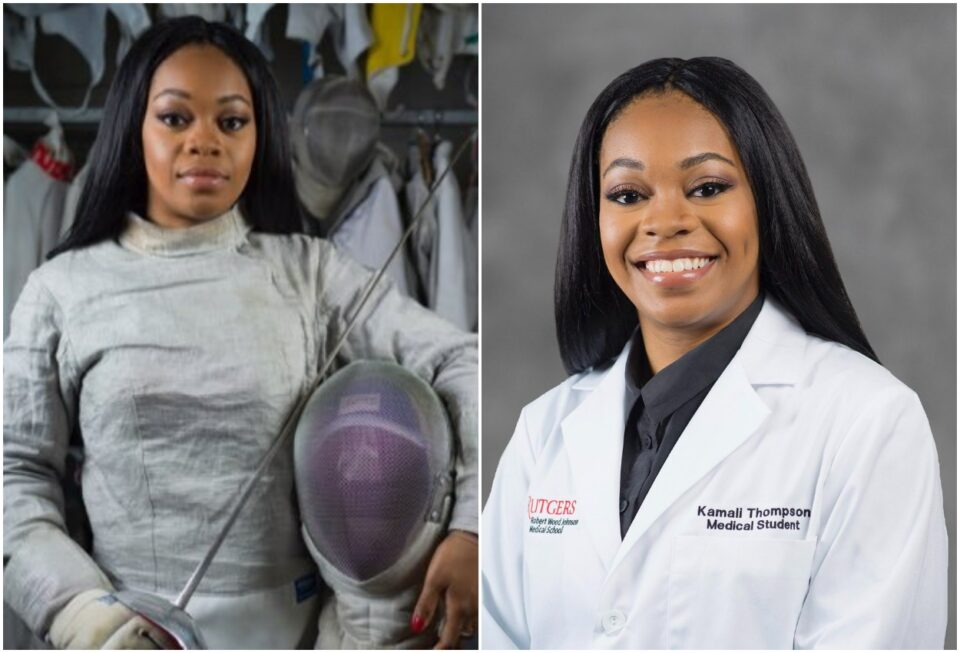 Among the many distinctions that describe Kamali Thompson, the eager U.S. Olympic alternate continues to prove that there is no ceiling to her potential. As a professional fencer, she made her Olympic debut at the Tokyo Olympics for Team USA. After completing business and medical school, she is now an orthopedic surgery resident at Temple University.

The Teaneck, New Jersey, native grew up in a family that encouraged the importance of dedication, commitment, and success. Even starting high school at 12 years old was an accomplishment she had earned due to her learned life skills growing up. According to Teen Vogue, she takes pride in trying her best, and so do her parents. Her love of dancing at an early age led her to the competitive fields of fencing and medicine.

According to OwlSports, “I started fencing as a freshman in high school and joined a club as a junior,” explained Thompson. “I had never considered playing sports in college so at the point that it became an option, I had to find ones that had fencing.”

Thompson met Temple’s Head Fencing Coach Nikki Franke at a national fencing competition with her high school. “Her and my mom hit it off immediately and my mom was telling me that this would be a great school,” said Thompson.

After graduating high school, Thompson enrolled in the Pre-Med degree as part of the honors program at Temple. Her accolades were plentiful. During her college fencing career, she was a two-time winner of Temple’s PNC Female Student-Athlete of the Year, earned All-American Honors, and was a four-time NCAA Qualifier, placing 6th her senior year. Humbly, she managed to juggle all of her accomplishments with the workload of her medical program.

As a student-athlete, Thompson continued to persevere even after her college graduation while completing her M.D. and M.B.A at Rutgers University. She became the 2016 Division 1 Women’s Sabre National Champion, a member of the World University Games Team (2013), a U.S. National Team Member (2019), and a 2021 Olympic hopeful, with the qualifiers concluding in May.

In addition to her Olympic dream and medical ambitions, Thompson enjoys blogging. She has also utilized her training and life skills to establish her own business called ‘Sabre and a Stethoscope,’ where she chronicles her journey to inspire others.

“Eventually, I want to get into a space where I am providing resources to premedical students, most importantly underrepresented minority students,” said Thompson.

In July 2021, Thompson became an orthopedic surgeon resident at Temple Hospital. She is stepping into the role, not only to save lives but to represent Black women and to live her life authentically.

“Millennials don’t live by the same status quo our parents live by or our grandparents. I can take my fencing, my medical career, and my MBA and make it into whatever I want to make it into. I think that’s exciting. I want to open up other opportunities for myself, whatever they may be, down the line,” she explained in a Teen Vogue interview.