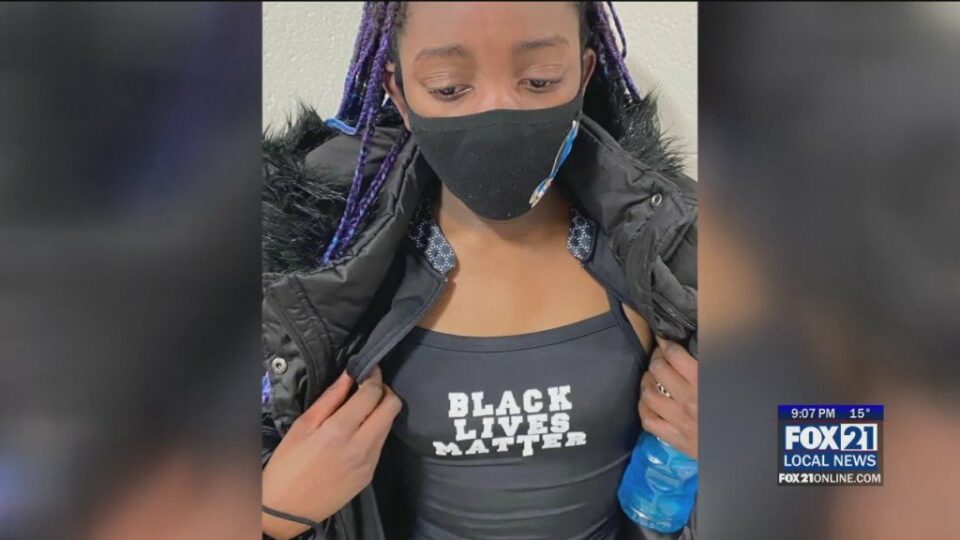 Twelve-year-old swimmer Leidy Gallona rocked a Black Lives Matter swimsuit she designed for a swim competition in solidarity with 22-year-old Amir Locke, who was shot and killed by Minneapolis police serving a no-knock warrant.

An independent volunteer official nearly disqualified the swimmer, claiming that her swimsuit went against USA Swimming’s policy of no political language, according to WDIO News.

The YMCA-sponsored competition occurred on Sunday at Superior High School in Minneapolis.

According to Gallona’s mother, Sarah Lyons, the official claimed they had the authority to decide what’s “political” or not after demanding that the young swimmer remove the swimsuit, according to Fox 21.

Gallona chose to continue to wear her swimsuit with intention following Locke’s death.

“The easy thing to do would’ve been to take the suit off, and she chose not to do that,” Lyons said. “She chose to stand up for what she thinks is right. It’s a proud mama moment for sure.”

“Black people that are getting killed, their lives matter because they were, their lives were taken from them. So I think it’s respectful to show that I matter; everyone that’s Black matters too,” Gallona explained.

Lyons contacted the head of the Duluth NAACP, who stood firmly in their support of her that day. They immediately called for the removal of the meet official. After a discussion with YMCA leadership, the. official’s decision was overruled, and Gallona was allowed to continue competing in Sunday’s events.

In a statement issued Sunday, the YMCA confirmed removing the official and banning them from any future Duluth YMCA-sponsored events.

They said in part, “The Duluth YMCA is saddened that the student, their family, and teammates had to endure this unacceptable behavior. The Duluth YMCA will continue our ongoing commitment to train all staff and volunteers on diversity, equity, and inclusion. The Duluth Area Family YMCA is committed to being an anti-racist organization and stands with BIPOC communities throughout the Northland and throughout our country. We know that Black Lives Matter and we will continue to work to educate ourselves, to stand against inequality, and to strive to be active allies in the ongoing fight for diversity, equity, and inclusion.”