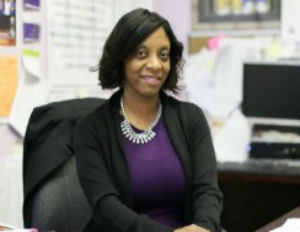 As the Principal of Motts Hall Bridges Academy,Â Nadia Lopez isn’t merely providing leadership and oversight to a public school with nearly 200 students and low parent involvement–she’s figured out a way for them to explore opportunities around the world by tapping into new-age innovators and change makers working across many different industries. From meeting young black business owners, and getting an inside look at what it’s like to work at Facebook to walking around the grounds at Harvard University–experience is the best teacher, especially for students living in Brownsville, Brooklyn, a crime-ridden area in New York City.

It’s an inspirational story for anyone struggling to stay motivated in an environment where many people have lost hope in its potential. When Black Enterprise caught up with Lopez and asked her how she stays committed to educational excellence in spite of troubling statistics on student achievement, Lopez stressed, “it’s been hard. At times, I’ve been ready to quit. When I first started in the educational system, I was a special education teacher teaching social studies in an inter-collaborative classroom. I often questioned what I was doing in teaching. It was very different than when I was growing up. My mom was involved in my education and I had teachers who believed we would all be successful. But I walked into a space where kids were disrespectful to adults and adults didn’t have high expectations of children. So I was confused, conflicted and ready to leave the education system. But I would look at my daughter and realize someone would do the same thing to her–so I changed my perspective and asked myself: ‘How can I learn from these kids? What did middle school need from me?’ I learned to listen and I learned what the kids didn’t know.”

“I realized these kids walk through Brownsville every day, where they see a lot of hustling and people trying to create something out of nothing,” Lopez continued. “The reason why they join gangs is because they don’t see any other way of making money. So I thought to myself, if I don’t create something for them they will get into gangs, because that will help them sell drugs, guns or rob people for money. We created an entrepreneurship program that every 7th grade student must complete. They also watch shows such as Shark Tank so that they can learn how to pitch their ideas and sell themselves.”

Lopez also emphasized, the success of your life comes down to your vision. “In December 2013, I participated in Karen St. Hilare’s vision board workshop for school parents. I was intrigued by a ForbesÂ magazine cover which featured people working in philanthropy with a special focus on education. I noticed not one person on that cover looked like they would come from Brownsville, Brooklyn–a neighborhood known for gangs. InÂ Brownsville, you don’t see growth, you see hustling. You see a lot of people trying to create something out of nothing. So, I found a space to place my very own picture on the magazine cover and wrote–‘There’s power in education and I can change the world.’ I also included the caption ‘Nadia Lopez an Innovative Leader in education who invest, inform and inspires children.’â€

As life would have it, Â Lopez was featured in the New York TimesÂ in 2014.Â The very next year, Lopez’s influence was felt around the world, thanks to Humans of New YorkÂ (HONY), a book, and blog featuring random interviews with people on the streets of New York. HONY founderÂ Brandon Stanton asked a young Motts Hall student,Â Â “Who’s influenced you the most in your life?” “My principal, Ms. Lopez, he replied.â€ “How has she influenced you?â€ “When we get in trouble, she doesn’t suspend us. She calls us to her office and explains to us how society was built down around us. And she tells us that each time somebody fails out of school, a new jail cell gets built. And one time she made every student stand up, one at a time, and she told each one of us that we matter.” From that post, the school raised more than $1 million, to send their ‘scholars’ to visit Harvard University.

Lopez, who works a Monday — Sunday schedule, also understands vision alone is not enough to succeed. “Everything about my school is intentional. From the words we use to empower them to the colors of our uniforms. We use the word ‘scholar’ because they need to know they are life-long learners. ‘Brownsville Brilliance’ means they are brilliant, intelligent and amazing children. We use the word ‘focused’–because kids entered our school with low numbers in the district and in NY State, if you are not meeting the proficiency requirements they call you a focused school. So how do we take this negative and turn it into a positive? Well, I created shirts with the word ‘focused’–because I wanted the kids to own what that means–education, attendance, and our grades–it turned it into a mantra to focus on those things. The colors purple and black signifies royalty–I wanted them to understand they come from royalty. I want them to know that historically we’ve had to overcome, but we’ve created some of the greatest things ever built today, and it still can’t be explained. Just like today, people want to know how did I do it, but it really can’t be explained. It just starts with a vision, intention, and focus.