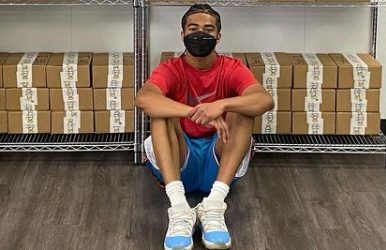 Science nonprofit founder Ahmed Muhammad was accepted to 11 universities to which he applied. Credit- Instagram- @kitscubed

Ahmed Muhammad will become Oakland Technical High School’s first Black male valedictorian. According to the San Francisco Chronicle, Muhammad has also been accepted to 11 universities. Harvard, Stanford, Princeton, and Columbia are some of the 18-year-old’s top choices. Selecting one of them would allow the scholar to capitalize on his interest in math and science since he could major in engineering.

“It’s an awesome feeling to know that all the hard work I put in and all the support and love I received paid off,” Muhammad told the San Francisco Chronicle. “It’s pretty cool I was named valedictorian.”

KTVU mentioned that Muhammed will be recognized for having the highest academic rank in his class. The scholar will complete his four years of high school studies with a cumulative 4.73-grade point average. KTVU also said that after applying to 11 universities, Muhammad was accepted into each one.

“It feels amazing. I’m grateful to be accepted to any single college, but 11 of them?” Muhammad said in a KTVU interview.

Muhammad also seeks to inspire the next generation of science enthusiasts to pursue knowledge. The news station also said that Muhammed is most proud of making an impact on youth. The innovator founded a science education company Kits Cubed. KTVU explained he started it last year, shortly after the pandemic began.

According to the website, Kits Cube’s mission is to introduce youth to the wonders of science through fun, affordable, and accessible means. It is also stated that every science kit purchased online enables more kits to be provided for low-income students and communities. In conjunction, CNN reported that Muhammad’s most important goal with Kits Cubed is to teach kids that science is always within their reach. Muhammed informed CNN that Kits Cubed has reached over 2,000 young people in Oakland alone.