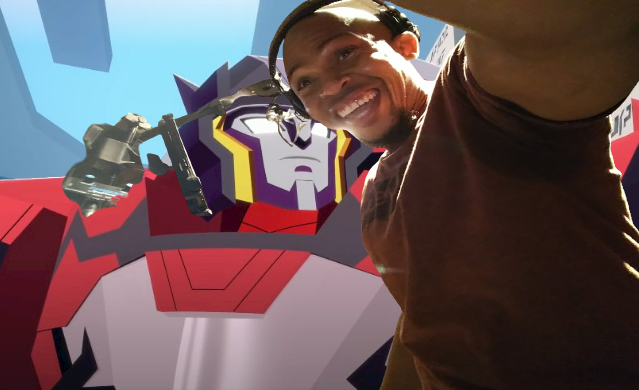 You may not know Xavier Cadeau, but the talented and versatile voice performer has voiced some of the world’s most popular video game and cartoon characters.

Cadeau holds the distinction of being the first African American to voice the iconic Dead End character, which has appeared in the “Transformers” series for more than 30 years. His distinguished career includes doing voices for ‘Grand Theft Auto San Andreas and Grand Theft Auto V as well as Teenage Mutant Ninja Turtles.

The voice actor was born and raised in Brooklyn and took full advantage of New York’s theatre and acting scene as he grew up. By the time he got to New York University, he was quickly bored with their intro classes, so he transferred to Marymount Manhattan College, taking a class in phonics and then went on to work with private coaches to further develop his speech.

“I then spent time with theatre companies at National Black Theatre, Henry Street Settlement and Circle in the Square,” Cadeau told BLACK ENTERPRISE  “I was introduced to the Michael Chekhov technique which laid a foundation that would become instrumental in my career.”

In addition to cartoons and video games, Cadeau has also done a wide range of performances including commercials, stand up comedy, poetry and music. The Transformers voice actor was also nominated for three awards at the 2021 One Voice USA Awards in August. Cadeau was nominated for best performance in a political commercial, male voice over artist of the year and won the award for best male for radio imaging.

He called the win an amazing honor adding that radio has done so much for his life and he appreciates all the opportunities it’s provided him.

“This honor reminds me that radio remains number one from a marketing/advertising perspective for businesses,” Cadeau said. “No matter if it’s a commercial, TV show announcer, cartoon, trailer or promo, the idea is to be different yet effective. Be great and be memorable in your station branding.”

The Brooklynite attributed his success as a voice actor to his mentors saying they not only helped with his craft, but it also let him know he could make it in the business

“I think having the right mentors is important. If they aren’t available, then you have to self nurture and model the behaviors of those you’re inspired by,” Cadeau said. “When I began working with people like Kevin “Dot Com” Brown and his brother Andre Brown at the Uptown Comedy Club and honing my stand up/sketch/improv comedy and acting skills, then things took off.

“There is a certain connection and mentoring I need by my community and ethnic culture that makes me feel ready to handle whatever the business throws my way,” he added. “It allows me to dig deeper as an artist. I learned that being a great actor requires me to be compelling and captivating in all that I do.”

Cadeau is also helping those who want to get into voice acting and has his own voiceover school where he holds classes on the basics of acting and developing the body as a speech and voice instrument. After more than two decades in the industry, Cadeau is branching out and starting his own digital marketing firm, which is slated to debut next year.

“Whether it’s a commercial for broadcast or corporate video for an award show or internal presentation, or a car dealership looking to bring in buyers,” Cadeau told BLACK ENTERPRISE. “I see the need for truly effective sales increasing content that doesn’t just entertain, but increases sales and awareness.”