Meet the Members of The Money Team 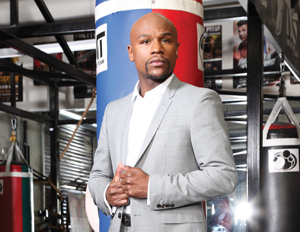 Jackie Starr, @icedoutbarber
Starr is the personal master barber/stylist for Mayweather, and also the sole proprietor of the Iced Out Barber Shop in Las Vegas. With the success of her first shop, she has expanded and opened up a second location to better serve the Las Vegas community.

Famous J, @IamFamousJ
The 7-year-old, straight-A, honor roll student and boxer is learning firsthand from his mentor Mayweather. As one of the youngest members of the team, Famous is getting a world-class education in the sport of boxing, the business of boxing, and where dedication to the craft can take you. “One of the biggest things is knowing when it is time for school and time for training,” says Famous. “School always comes first and I know I can’t be the best fighter without my education first.” In 10 years Famous says he wants to be a world champion. With The Money Team in his corner, he is well on the way.

Caitlyn Christian Amari Price aka LIL CECE, @TheCeCeShow
Lil CeCe is a social network superstar that has caught the celebrity attention of Kevin Hart, Tamar Braxton, Russell Simmons, and Sherri Shepherd, to name a few. The vibrant personality, actress, and kid-comedian has appeared on The Steve Harvey Show, The Bethenny Show, and other national media outlets. Price is a straight-A, honor roll student who is placing her priorities in order. “I love school,” says Price. “I want my very own talk show one day, but I have to be smart to do that.”