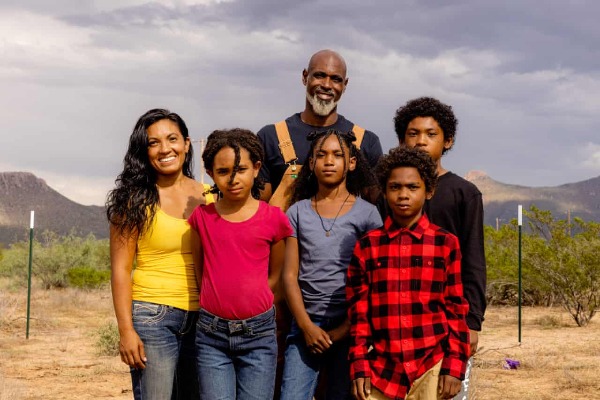 The parents of four were inspired to open their own farm during the pandemic, The Guardian reports. With everything being shut down and resources limited, the two former bodybuilders realized they were being deprived of the protein they were so used to easily consuming.

After selling his 1972 Chevy Caprice, the Stewart’s purchased 10 acres of land just outside Douglas, Arizona. Together, the family of six would run and operate one of the few Black-owned ranches in Arizona. In October 2020, the biracial family launched the Southwest Black Ranchers and immediately sought help from other Black farmers.

Thanks to discriminatory lending practices, Black farmers have dropped from 14% to less than 2%, The Counter reports. But a Facebook group connected the Stewarts to Texans who taught them about hydroponics and a South African farmer whose regenerative agriculture work is inspiring their plans for the ranch.

In Arizona, the Stewarts aligned with the Black gardeners and homesteaders within the group, Drinking Gourd Farms, who are helping the Black ranch owners mulch their farm’s soil. Now they hope to inspire the next generation of Black farmers through their efforts.

The parents are looking to the future and how their ranch can maintain wealth in their family across generations.

“We want to create a situation where our kids have an option, and they have a trade,” James said. In the event, their kids “don’t want to take on the debt” of college “that doesn’t hinder them from being successful.”

The Stewarts are still hard at work making sure their farm stands the test of time. They were able to purchase their animals and initial supplies through a GoFundMe; the family is applying for grants, including ones from the USDA, to secure their ranch’s future.

“We’re trying to “create an alternative system for minority and socially disadvantaged ranchers” Rachael added. In hopes of passing down a business to our children “that is always going to be needed”