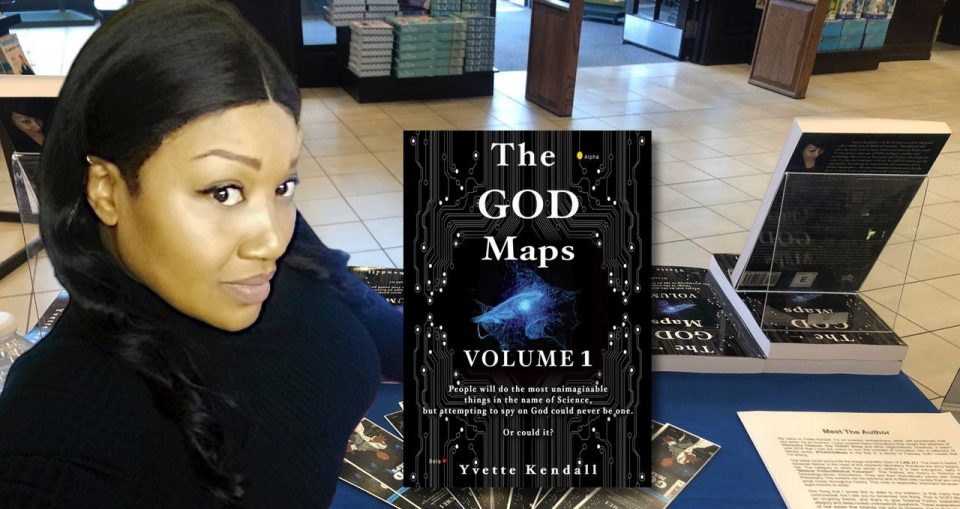 As a Black woman science fiction writer/content creator, Yvette Kendall is the definition of a rarity. Kendall is the author of The GOD Maps series and also the creator of the new sci-fi sub-genre Biblical futurism.

Owner of her own publishing company, Stravard Lux Publishing House, Kendall will be publishing her brand of zombie anthologies named The American Zombie Chronicles and a children’s book called A Zombie For Mommy!

BLACK ENTERPRISE got the opportunity to talk to Kendall about what motivated her to become involved with the sci-fi genre and her future plans.

How rare is it for a Black woman to be engulfed in the science fiction genre as a writer and creator? What motivated you to be involved in it and what keeps your creativity going?

People say that I’m a rare occurrence in that I’m fully immersed in the concepts of science fiction and futurism in my daily life. My previous vocation was that of an inventor and product developer. Science fiction is the breath of innovation. Whether it is a three-dimensional product or building a new universe with words, it has been part of my everyday experience.

I’m motivated by the stories that present themselves to me in such a complete and demanding manner. I feel that being a Black woman in any time period (past, present, or future) makes me and other women like me an indispensable demographic. Our stories orchestrate energies that shape and mold new paths. We have a say in what this world will look like in the future because it cannot exist without us.

Being the first female writer for a zombie anthology under Caliber Comics, how did that accomplishment happen and what should we anticipate in the future?

Social media is a powerful tool! Networking and sharing my sci-fi novel online are invaluable. I was approached by someone on Facebook that has a comic book company that publishes through Caliber. He asked if I had ever written zombie horror before. Up until that point, I had never ever read a comic book. He urged me to try my hand at it, and I agreed.

Within the next few days, I had written 12 unique stories that blew him away! The catalog that I created was more than they needed at the time. Always thinking ahead, I began my own anthology in the same genre.

That decision gave birth to The American Zombie Chronicles. As I move forward, my schedule is to finish the trilogy of The GOD Maps, and put artists in place to formalize my new comic book line. I have several other mind-bending stories on tap that I’m writing as well like The Revelation Activation and another brand of spooky comics called The Conspiracy Theory Horror Edition.

How difficult is it for a Black woman trying to break into the sci-fi genre? What do you think it will take to make it less so?

I believe that the difficulties arise when our stories are read by people whose experiences are not reflected on those pages. When they can’t relate or when the content is too honest to digest, there can be an authority-ladened kickback.

That kickback can come in the form of unfavorable reviews or open protests of your work. As a sci-fi writer of color, you may be reprimanded for taking latitudes that other writers would otherwise be praised for. There’s a need to have people that understand your background intrinsically and to aid in telling of your stories.

I feel that the solvent for this issue rests in having more people of color in key creative spaces. People like Ava DuVernay, Regina King, and Shonda Rhimes, to name a few. Because they are pioneers, these women are integral in expanding the scope of our work.

What’s next for Yvette Kendall? Is there anything in the works that you’d like to speak of?

The future is really bright for me at the moment! I’m in talks right now to turn my flagship novel The GOD Maps, Volume One into a television series. I’m super excited about that recent development!

I’m also working hard to have the new sub-genre that I created called Biblical futurism recognized globally in the writing and film industries. It’s important to me because it’s the very genre that I employ to write my novels.

Biblical futurism has gained a following since its conception. Besides that, I have published a children-friendly zombie book series. The first book is on shelves now and it’s called A Zombie For Mommy!

What advice would you give to the little Black girl who wants to follow in your footsteps or the Black woman who is already entrenched in sci-fi but wants to advance to the next steps for her?

My advice would be to write daily, even if it’s just a paragraph. Books are nothing but a congregation of paragraphs that complement each other. Instituting this habit will allow your creative forces to grow. Another thing is to not focus on particular writing styles set by others.

There’s no right or wrong way to communicate your vision. Science fiction (by loose definition) is a broad field without set parameters. Don’t be afraid to go against the prescribed norms in order to find your voice.

For the ladies that are in the midst of it all, my suggestion is to find a team that believes in you and your vision. Put effort into providing quality content and imagery. It may be unfair, but books are judged by their covers and their titles. Protect your intellectual property with copyrights, trademarks, and other branding methods.

Be sure to “market … market …market,” and never forget to network strategically. That way, when the opportunity comes, it will be glad that it found you and not the other way around!

Last but not least, recognize that you are enough, that your voice matters, and that “YOU” matter.