Meeting Students Where They Are 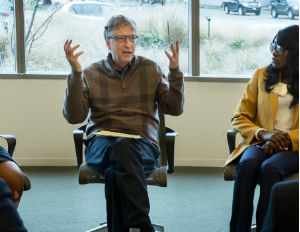 When I was applying to college, I wanted to go to one of the best schools.

[Related: Women’s History Month: Q&A with Talitha Hampton, President of the National Organization for the Professional Advancement of Black Chemists and Chemical Engineers]

At the time, I thought of “the bestâ€ as the colleges that were the most selective. I applied to Harvard, Yale, and Princeton–schools whose reputations are burnished as much by the huge numbers of applicants who are denied admission as the privileged few who are let in.

But over the years I’ve learned that there are many other ways to measure what makes a school great.

Institutions like Harvard (where I ended up going) have an important role to play in higher education. They do amazing research (which is something I support, enthusiastically) and have their pick of the top students from around the world.

But equally impressive to me are the universities that take on the students who haven’t had a great high school experience, the students who graduate with low GPAsÂ or poor SAT scores and might have trouble getting accepted to college. These kids, many of them first-generation college students from low-income backgrounds, know that a college degree is the surest path to the middle class. But they are also the ones who are at the highest risk of dropping out.

Our foundation is always looking for universities that have learned how to give these students the support they need to graduate. They are not just opening the door to college for a new generation of students. They are also helping to redefine the future of higher education in the U.S.

Last month, I had the chance to sit down in Seattle with administrators from two outstanding institutions, Johnson C. Smith University and Delaware State University,Â that are experimenting with exciting new ways to serve these at-risk students.

“We take pride in the fact that we do not cherry-pick our students. You can come to us as you are,â€ Dr. Harry Williams, president of Delaware State University, located in Dover, Delaware, told me.

Encouraging more low-income and first-generation college students to get college degrees is critical not just for the students themselves, but for the health of America’s economy. By 2025, two-thirds of all jobs in the U.S. will require education beyond high school. At the current rate the U.S. is producing college graduates, however, the country is expected to face aÂ shortfall of 11 millionÂ skilled workersÂ to fill those roles over the next 10 years.

The problem isn’t that not enough students want to go to college. More students are enrolling in higher education programs than ever before. The problem is that too many drop out before completing their degrees, especially students from low-income families. In fact, a student from a wealthy family in the U.S. isÂ eight timesÂ more likely to earn a bachelor’s degree by age 24 than a student from a low-income family.

I met one student, Earlee Corbin, from Johnson C. Smith University, who is an example of that statistic. He went to college a decade ago on a baseball scholarship but dropped out after his freshman year to take care of his father, who was ill, and to work to help support his family. Now 29, he’s back in a night school program to finish his degree while still working full time. The hours are long, but the personal support from his university–from both his professors and other students–is making the difference, he told me.

“They treat us like family. They put us in a position to succeed and the only option we have is to succeed,â€ he said.

Giving at-risk students a shot to beat the odds is central to the mission of both Johnson C. Smith and Delaware State universities. Their commitment is rooted in their histories: Both institutions are historically black universities founded after the Civil War to provide African Americans an opportunity for higher education. While the legal barriers that once blocked black students from attending other institutions are now removed, America’s historically black colleges and universities still play an outsized role in providing education to underprivileged students. More than 60% of the students they enroll come from low-income backgrounds or are the first in their family to attend college.

Among historically black colleges, Johnson C. Smith University and Delaware State University are two of the most innovative at recruiting at-risk students, keeping them in school and giving them the support they need to graduate.

Johnson C. Smith University offers students who don’t meet the GPA or SAT requirements for regular admission the opportunity to apply for an intensive first-year program to help them succeed in college. In addition to looking at the grades and test scores of applicants, the school examines their non-cognitive and meta-cognitive skills, like problem-solving abilities and perseverance, to determine if they have what it takes to get a degree. The school prides itself on seeing the potential in students other schools may not.

“We put them into a very rigorous program of study and we watch them get to that ‘Aha!’ moment. That’s when we know we have them on the right track,â€ said Dr. Ronald Carter, president of Johnson C. Smith University in Charlotte, North Carolina.

Delaware State University created a personalized guidance programÂ that provides first-year students with mentoring, tutoring, and other resources to help them navigate the often difficult transition to college life.

Both institutions collect and analyze huge amounts of data to track students throughout their college career. If a student taking a psychology quiz gets a failing grade, it triggers an e-mail or phone call from a counselor to find out what went wrong and how to get that student back on track.

During one point in our conversation, Dr. Williams and his staff shared a chart showing how many students were expected to drop out between their freshman and sophomore years. Using predictive analytics, they have been able to target students who are considered the most likely to drop out–based on SAT scores, financial background, and other factors–and give them the support they need before they encounter a problem.

“The data show that if we can keep you in college after your first year, you have a higher percentage chance of graduating,â€ Dr. Williams said.

Providing so much personal coaching to students can be expensive, placing increased pressure on already strained higher education budgets. Both schools have made difficult budget cuts, eliminating unpopular majors and thinning administration and staff to help support these programs.

Why not just let the students who can’t make it drop out? Delaware State University staff told me this surprising fact: It actually costs a university more–in lost tuition–to allow a student to drop out than it does to pay for the support needed to help retain that student.

If it makes more financial sense to retain a student than let them drop out, other colleges may soon have a lot to learn from Johnson C. Smith and Delaware State about how to help more students complete their degrees.

For now, both schools are still learning themselves. The graduation rate at Delaware State is 37%, and 42% at Johnson C. Smith. While those rates are up over previous years and remain higher than other institutions serving underprivileged students, both schools are working hard to boost them further.

I look forward to hearing more about the progress these schools are making in the years ahead. What’s already clear is that their innovative efforts to give more students the opportunity to obtain a college degree have yielded impressive results. They’re not just transforming how colleges operate. They are transforming lives.

This post was written by Bill Gates, co-chair of the Bill & Melinda Gates Foundation.