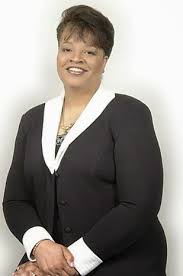 BLACK ENTERPRISE has brought together thousands of women who are serious about making power moves at the annual Women of Power Summit, now in its ninth year. Executives, entrepreneurs and innovators network, bond and share ideas that help them move their businesses, their careers and their personal lives forward. They also honor the leaders among them, those outstanding women who receive the coveted Legacy Award.

Joining the group of this year’s esteemed honorees is Valerie R. Daniels-Carter, president and CEO of V&J Holding Cos. Inc., ranked No. 33 on the Black Enterprise Industrial/Service 100 list with $88 million in revenues. V&J is one of the largest women-owned and African-American-owned food service franchise operators in the U.S. with 114 franchise units that employ 4,000 people.

Daniels-Carter is holding court as the queen of franchising with overall minority representation in the industry at 15%, according to Franchise Business Review. Of all African American franchisees, 78% are single-unit owners while only 22% are multi-unit owners.

Milwaukee-based V&J is a company she started in 1982 with her brother John, an attorney, who now serves as Chairman. Since that time the company has grown from a single Burger King restaurant into a 12-store operation plus 68 Pizza Huts throughout four states, along with five HÃ¤agen-Dazs and five Coffee Beanery stores. V&J also teamed up with former NBA All-Star Shaquille O’Neal, sharing ownership of eight out of 21 Auntie Anne’s soft pretzel stores. And V&J has recently become a franchisor: It owns MyYoMy Frozen Yogurt.

Daniels-Carter received a Bachelor of Arts Degree from Lincoln University and an MBA degree from Milwaukee’s Cardinal Stritch College. She began her career in banking but always planned to own a business.

“As I began researching franchises, I realized I needed more capital,â€ she recalls. That’s when she asked her brother to be her business partner.

Her dream became a reality in 1984, when she opened her first Burger King restaurant in Milwaukee. With little knowledge about the fast-food industry, the entrepreneur took two years to learn the ropes prior to running her first franchise. Once she was confident with her developing management skills, Daniels-Carter opened her second restaurant a year later and the third one soon after. “As we started adding locations and brands, we changed the name to V&J Holding Companies,â€ she notes.

While her business blossomed, Daniels-Carter had to overcome the loss of two important people in her life. In 1999, she lost her husband in an accident, and the following year, her mother passed away. She has since helped fund the Mother Kathryn Daniels Conference Center for Community Empowerment and Reunification. Named after her mother, the center houses the state’s largest Boys and Girls Club, a loan center, and a wellness facility offering affordable healthcare.

The savvy CEO, philanthropist, motivational speaker, and author of Your Business Is His Business, through it all has maintained a vigorous life-style, while acquiring awards and recognition along the way. An avid sports fan (who once received an offer from the Milwaukee Does to play pro basketball), Daniels-Carte became the first African American women elected to serve on an NFL Board of Directors with the Greens Bay Packers in 2011.

Power Move Quote: Don’t allow anyone or anything to prevent you from achieving excellence.