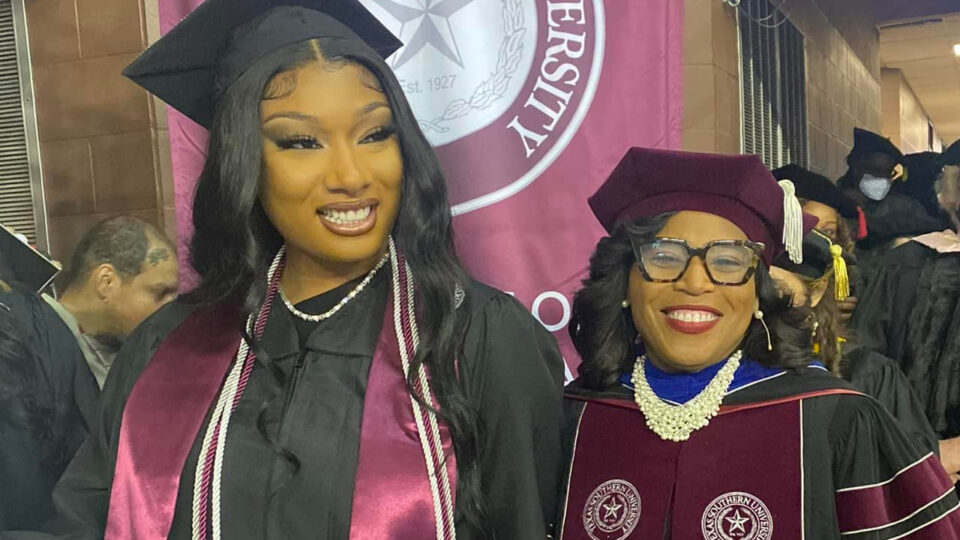 The Texas native was beaming with pride as she was seen with Texas Southern University’s President Dr. Lesia Crumpton-Young on its Facebook page as they acknowledged her accomplishment.

Not only is the college grad celebrating her degree, but she has also set up a college fund to help other students achieve their goal of a college education.

The Savage rapper announced that she would be graduating this month when she shared the news with fans on Instagram along with a selfie in her graduation outfit. After taking a brief hiatus, Megan returned to Texas Southern in 2019 to complete a degree in health administration. Her re-enrollment came months after the release of Tina Snow, the mixtape that kicked off her meteoric rise.

Her educational pursuit was inspired by her mother, Holly Thomas, and her grandmother, who both passed away in March 2019. According to Pitchfork, when Thomas—a former rapper herself—discovered her daughter’s talent, she made it a requirement that Megan could pursue a music career only when she turned 21 and promised not to abandon her education to pursue a rap career.

The bulk of Megan’s success has happened since she went back to school. Over the last two years, she’s amassed 11 platinum singles, including her viral hit “Savage,” which, boosted by a Beyoncé-assisted remix, has sold over 4 million copies. The song also earned Megan two Grammys in 2020—for Best Rap Song and Best Rap Performance—the same year she took home the Grammy for Best New Artist.

During this period, she has expanded beyond the music world, becoming an ambassador for Revlon and Mielle Organics and launching successful marketing campaigns with CashApp, Fashion Nova, Nike, and most recently, Popeye’s Chicken.