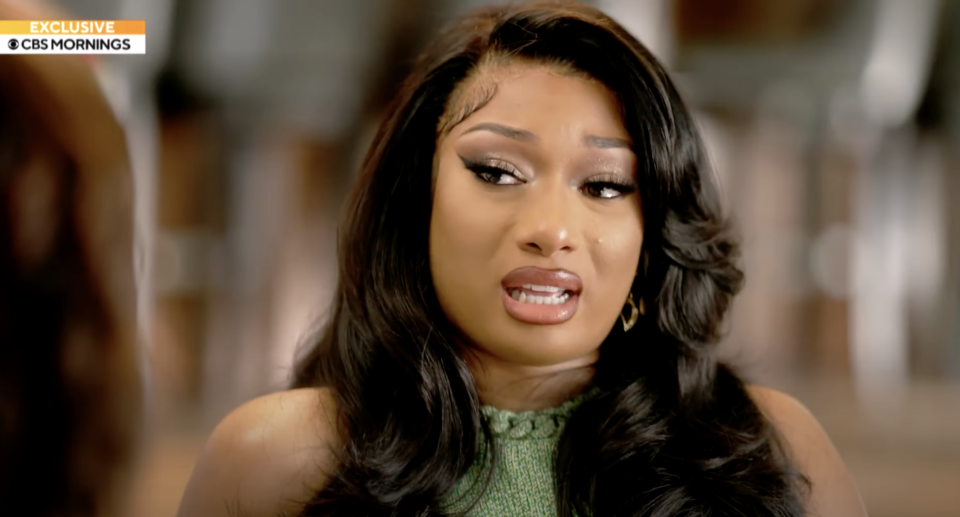 In the felony assault case that occured in 2020 after a pool party in the Hollywood Hills, she alleges Lanez shot her in her feet after an argument ensued while getting ready to leave in a car.

Lanez denied the allegations and ​​entered a plea of not guilty back in July 2020. More recently, he was taken into custody for violating a judge’s orders in the case that prohibited the rapper from contacting or harassing Megan Thee Stallion or speaking about any discovery in the case with outside parties. The judge raised Lanez’ bail from $250,000 to $350,000 after hearing nearly an hour of statements that further incriminated him. Lanez spent approximately five hours in custody before being released.

In a snippet of the emotional interview with Gayle King on CBS Mornings, Megan Thee Stallion recounts that night in Hollywood, saying the incident quickly escalated and turned violent after getting out of the car.

“It was an argument because I was ready to go and everybody else wasn’t ready to go. But that’s, like, normal friend stuff,” she said. “It shouldn’t have got this crazy.

“So I get out of the car and it’s like everything happens so fast. And all I hear is this man screaming. And he said, ‘Dance, b—-.’ And he started shooting. And I’m just like, ‘Oh, my God.’ Like, he shot a couple of times. And I was so scared,” continued the rap star, fighting back tears.

Kings asks her if Lanez was in or out the car at the time of the shooting and she says he was standing up in the car, over the window as he shot at her.

She admits to fearing for her life and never having been shot at before.

The Los Angeles County District Attorney’s Office charged Lanez with one count of assault with a semiautomatic firearm that inflicted great bodily injury, and one count of carrying a concealed, loaded, and unregistered firearm in a vehicle, reports Rolling Stone. Lanez may face 22 years and 8 months in prison if convicted.

The case is expected to go to trial in September.

The full interview with King is set to air Monday, April 25 on CBS This Morning.