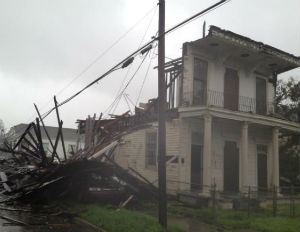 MSNBC host Melissa Harris-Perry‘s newly purchased home in New Orleans was destroyed at the hands of Hurricane Isaac. Harris-Perry tweeted a picture of the house’s damages stating, “feeling sad” although everyone was safe. “House was vacant except for my dreams,” she wrote.

On her show prior to the incident, Harris-Perry discussed the anniversary of Hurricane Katrina and how she and her husband had purchased the property to renovate, which is located in a high-crime area of New Orleans.

“For me, this house is representative of New Orleans and what we are facing since [Katrina].” She later called the property “just a physical thing” but “also a symbol of hope.”