The Promise of Memphis, A City Haunted by the Guilt of Dr. King’s Death [Opinion] 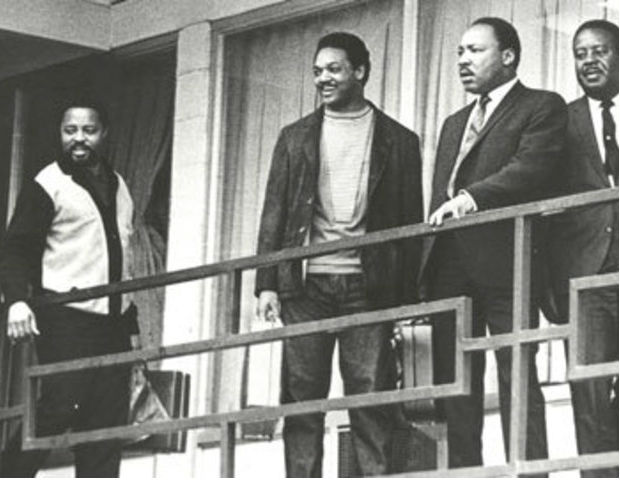 The Rev. Martin Luther King Jr. stands with other civil rights leaders on the balcony of the Lorraine Motel in Memphis, Tenn., on April 3, 1968, one day before he was assassinated. (Image: File)

It was April 4, 1968. Dr. Martin Luther King Jr.—then an unpopular Baptist minister fighting to break the chains of black oppression— stepped onto the balcony of the Lorraine Motel in Memphis, Tennessee. He leaned over the rail and asked a saxophonist to play his favorite song, “Take My Hand, Precious Lord,” at a rally that he intended to lead that day. A moment later, a bullet was fired, piercing King’s right cheek and bringing his life to a tragic halt. It was 6:01 p.m. Central.

On April 4, 2018, I stood at the Lorraine Motel where Dr. King was assassinated exactly 50 years prior. But at 6:01 p.m., instead of a booming gunshot, I heard a bell. It rang 39 times to symbolize the 39 short years that King walked the earth. Overwhelmed with grief, I shed a tear, not just at the remembrance of King’s untimely death, but for the hope and promise that was snatched away when he took his last breath. King—a civil rights leader, Nobel Peace Prize winner, and one of the world’s greatest change agents—accomplished a remarkable amount of work in less than 40 years. We will never know what more he would have done.

After listening to the bell chime on top of the Lorraine Motel, legendary R&B singer Rev. Al Green took the stage to fulfill King’s final request, post-mortem, singing an up-tempo version of the Gospel classic “Take My Hand, Precious Lord.” Instantly, the mood of the crowd shifted from somber to electric. We danced and cheered with Green, who was joined on stage by the Hon. Congressman John Lewis, Kerry Kennedy, the daughter of the late Robert F. Kennedy, and the Rev. Jesse Jackson, who convinced the soul singer to give an impromptu performance of “Love and Happiness” and “Let’s Stay Together.”

This moment, this trip, moved me and changed my perspective on King’s life and the work he left unfinished.

As a black millennial, I’ve benefited immensely from King’s work, who orchestrated the passage of the landmark policies like the Civil Rights Act of 1964, Voting Rights Act of 1965, and The Fair Housing Act of 1968. But being in Memphis for the 50th anniversary of his assassination reaffirmed that there’s still a lot of work left to be done.

On the day of his death, King was crusading on behalf of poor sanitation workers in Memphis, who were fighting for higher wages and better working conditions. Back then, Memphis’ sanitation workers made $1.80 or about $12.90 in today’s dollars. Meanwhile, nearly 60% of the black community lived below the poverty line.

Today, Memphis is in even worse condition in many ways. Back in the 60s, the Bluff City was a bustling hub for manufacturing and banking with the potential to become one of the biggest metropolitan cities in the South. But the Memphis economy plummeted after King’s death.

African Americans make up 64.1% of the city, but more than one-third live below the poverty line, making Memphis one of the poorest metro areas in the nation. Median family income, when adjusted for inflation, has dropped nearly 20% and lags far behind white households. According to “The Poverty Report: Memphis since MLK” from the National Civil Rights Museum, Memphis’ overall poverty rate in 1970 was 20.6%. In 2016, it rose to 20.8%.

Because poverty reaps crime, Memphis ranks as one of the top five most dangerous cities in the country, according to Forbes. Meanwhile, the percentage of unemployed black men has increased over the last five decades, from 32.3% in 1970 to 35.6% in 2016. Many who have a job still struggle to support themselves since the living wage for a single adult with no children working full-time is $10.75. That equates to $22,360 a year.

According to Rachel Knox, a former Memphis city council candidate who works as the Thriving Arts and Culture Program Officer for the Hyde Family Foundation, economic and social progress in the city was stifled after King’s murder. “Older people who were around during the assassination of Dr. King say that Memphis froze in place,” Knox told me.

It was an intense and devastating moment for the country, but especially for black Memphians, which seemly internalized their grief and anger. “In many ways, it was a defense mechanism to try to save us from ourselves,” says Knox. The pain of losing King after courting him to the city has been tormenting. “Many black Memphians feel personally responsible for Dr. King’s death,” she explained. “Not because we killed him, but because it was our efforts to try to organize, to try to create this radically different vision for Memphis to try and allow people to live their lives with dignity, regardless of whether they were a sanitation worker or a teacher or any sort of worker that was providing a service of the city.”

That burden has been passed down for generations. Even Knox, who is just 29 years old, admits to feeling culpable to a certain degree.  “I’ve been guilty in saying that ‘we killed King.’ It’s something that is embedded in the pain of Memphis,” along with a “level of shame.”

In addition to seeping into the consciousness of the city, the trauma of King’s death coupled with the upheaval caused by the sanitation strike triggered an acceleration of white flight, leading to the abandonment of businesses in downtown and central Memphis. To make matters worse, the city’s image was tarnished by national media outlets like Time magazine, which depicted Memphis as a “Southern backwater” and “decaying Mississippi River town.”

That was followed by the crack epidemic and the war on drugs that wreaked havoc on the African American community and further destroyed business and the spirit of the city. “If you are in some ways frozen in place, then you are not fighting and you let policies happen to you that are contributing to poverty and economic injustice,” said Knox.

Despite the dark cloud that lingers over the city’s past, black millennials in Memphis are ushering in a new wave of growth and promise. Knox is just one of many striving to redefine the Bluff City and bring King’s dream for economic equality to fruition.

“We have younger people who are saying this isn’t acceptable anymore. Freezing in place to try to keep ourselves safe and try to beat back the shame of his death does not give any justice to King’s legacy,” she said.

Victoria Jones, the founder of an arts education platform for black artists called The CLTV, is another young Memphian changing the city by feeding off of King’s vision for equality. “African American artists cannot thrive without space and the freedom to create and promote their perspective,” she said, “so The CLTV provides a platform for African American artists to freely create. Dr. King’s vision and my passion for black art and empowerment has allowed The CLTV to support a cultural shift in Memphis toward positive growth and creativity.” Her work also provides residents with tools, skills, and jobs to contribute to the community’s economic and creative health.

Ekundayo Bandele, a Brooklyn native who’s called Memphis home for over 10 years, is also using the arts to demonstrate the beauty and resilience of Memphis. In 2006, he founded the Hattiloo Theatre, one of the four freestanding black repertory theatres in the nation. “The narrative around his assassination in Memphis needs to flip,” he said. “The most popular narrative is that Dr. King was assassinated in Memphis, as opposed to the alternative narrative that King saw Memphis as being so important that he came twice within two weeks and wanted to see his dream lived out in our city.”

Tami Sawyer, another young Memphian mobilizing the city and reshaping its image, is using social and political activism to change the landscape. She’s currently running for Shelby County Commissioner for District 7, but she made national headlines when she led a movement to remove a Confederate statue in Memphis last June, which ignited a march against racism.

While the resilience of the city is further demonstrated through the city’s successful efforts to increase the black graduation rate and new attractions like Memphis Black Restaurant Week, perhaps the promise of Memphis is best exemplified in the residents who demonstrate that King’s message lives on in the same city where his voice was silenced.