Is Mentorship the Key to Success for Black Male Students? 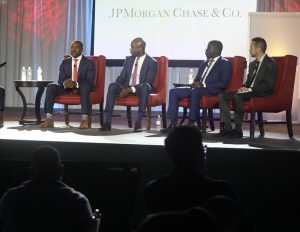 How do we ensure success for black male students? That was the question tackled during the session “BE Smart: How to Scale Models for Mentorship,” sponsored by JPMorgan Chase & Co. at the first-ever Black Men XCEL Summit.

The session focused on The Fellowship Initiative as a model of mentorship success and how it can be replicated.

Created by professionals at JPMorganChase, it “provides intensive academic and leadership training to help young men of color from economically-distressed communities complete their high school educations and better prepare them to excel in colleges and universities.”

“Instead of donating money, our firm wanted to get on the ground to have a firmer impact in these young men’s lives,” said Miles L. Warren III, vice president of global philanthropy at JPMorgan Chase & Co.

TFI includes three Saturday sessions a month as well as holiday break intensives with speakers and special projects plus a two- to three-week summer program.

One hundred percent of the students who have completed the program have graduated from high school and been accepted to a four-year college. Since 2013, students have earned more than $28 million in scholarships and financial aid.

There were five black male students in attendance from the current cohort representing Los Angeles, Chicago, and New York. They credited TFI with helping with the college process, providing a support system, improving their communication skills, and giving them greater exposure.

In addition to Warren, the panel consisted of a number of professionals at JPMorgan Chase & Co. who are involved with the program: Jonathan B. Simon, Executive Director, Head of Student Strategy Advancing Black Leaders; Malcolm Johnson, Executive Director, Real Estate Banking; Gerald Owusu, Fixed Income Sales Analyst, who was part of the first TFI cohort in 2009; and Daniel Horgan, Senior Director of Corporate Engagement.

“All of us can choose to apply our talents at any bank, but there are no other firms who have a commitment to the people who look exactly like I did 18 years ago. And that was meaningful to me,” Johnson said. “So it was a no-brainer to raise my hand to be a mentor.”

Johnson charged everyone in attendance with going back to their firms and challenging them to follow JPMorgan Chase’s lead to provide opportunities for our young people to enable black male success.

Horgan, whose team provides research, training, and other resources to the mentors to help them be more effective, noted that one in three young people are growing up without access to a caring adult. However, the funding doesn’t meet documented need: “Fifty-one percent of mentoring programs operate on an annual budget of less than $50,000. We’ve got to invest a lot more in the mentoring field.”

With such investment, the results can be substantial. “My mentor had such a profound impact on me. TFI was that key that unlocked all of these things for me. It’s incredible the network that becomes available to you,” Owusu said.

“If only this could be replicated” across corporate America, he continued, “the change that would happen would be phenomenal.”