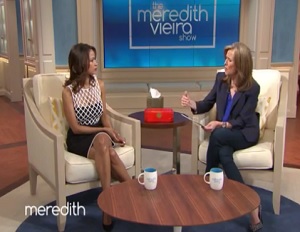 On Wednesday, Fox News contributor Stacey Dash appeared on The Meredith Vieira Show to share her opinions about the fight for equal pay between men and women.

In a sit-down interview, Dash argued that the talk surrounding equal pay is an excuse and rather than complaining women need to work harder.

“It’s the same thing with race. It’s an excuse,” said 48-year-old Dash. “Stop making excuses. If there are opportunities seize them and be prepared for them.”

Vieira then pointed to the numbers which show women earn 78 cents to every dollar a man makes and said she feels as though we’re fighting an uphill battle. The television host said that at the rate we’re going her 22-year-old daughter will be 65 before she reaches pay equality.

The two then went back and forth with Dash pointing out the career success that Vieira has reached and the television host clapping back saying it took her a long time to get to where she is today and hasn’t always received equal pay for her work.

Catch the full interview below and share your opinions in the comment section on whether you agree or disagree with Dash.