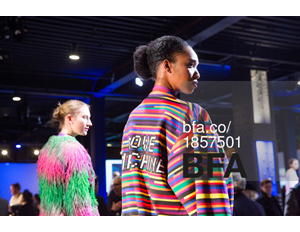 Technology is making inroads everywhere. The Met gala is where celebrities, politicians, and others of the well-heeled set, come together to walk the red carpet as part of an annual fundraising event Â for the benefit of the Metropolitan Museum of Art’s Costume Institute in New York City. Technology was the theme this year.

The event was officially named Manus x Machina: Fashion in the Age of Technology. “Manus x Machinaâ€ is Latin, literally for “handâ€ and “machine,â€ but figuratively, the phrase means “the power of humans and machines coming together,â€ explains Bustle’s Lindsey Rose Black.

And the celebrities waking the carpet delivered their best technology-inspired fashion. Many of the stars, including Taylor Swift and Lupita Nyong’o were decked out in futuristic, metallic dresses.

The most truly technical look was on Claire Danes. She wore a gown that was studded with LED lights that actually lit the dress up.

The dress designer, Zac Posen worked with a number of female programmers via the Google #MadeWithCode initiative, reports Fast Company. ThirtyÂ mini battery packs are sewed into the dress.

The wearable industry is also creating partnerships between tech companies and fashion designers.

In fact, researchers from the University of Missouri have found that the wearable technology industry can be hampered by communication breakdowns between technology engineers and fashion designers. Deepika Raj, a doctoral student in the textile and apparel management program at MU says these breakdowns can actually hurt company productivity.

Printing technology and in particular 3-D printing are opening new doors of creativity for fashion designers.

Digital dye-sublimation and direct-to-garment technologies are relatively new trends in the textile industry. These processes allow designers to alter textile designs, make color selections with the click of a mouse, and hone in on the fine details of their creations. Epson’s SureColor F-Series printers give fashion and textile designers alike an accessible means to bring their ideas and inspiration to life.