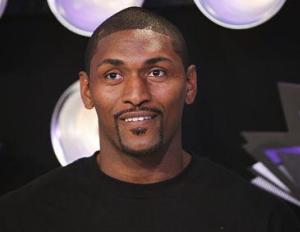 The player formally known as Ron Artest is no longer fighting on the basketball court, he’ll have to do it in family court, according to a story in The New York Daily News.

A lawsuit has been filed in Manhattan Family Court this week demanding he put up $140,000 so his son, Jeron Artest, can attend Poly Prep Country Day School in Brooklyn.

Jennifer Palma, states in her lawsuit that Metta World Peace verbally agreed last year to pay for their son’s high school education at Poly Prep, where he is enrolled as an eighth grader.

“As soon as we got to New York, (Metta World Peace) suddenly became evasive about paying Poly Prep’s fees,â€ she claims in her suit.