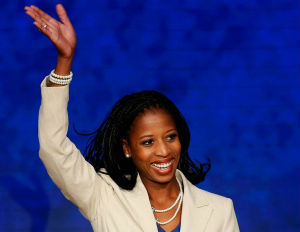 Utah congressional candidate Mia Love has quickly become the Republican party’s political darling, having passionately championed conservatism at the Republican National Convention. Love, who is the daughter of immigrants, will become the first Haitian-American member of congress if elected in the November general election.

Though Love has been vocal about her immigrant background and has a rather strict stance on immigration in the United States, recent reports from Mother Jones suggests that Love was considered to be an “anchor baby.” Anchor baby is a term used to refer to babies born in the U.S. to help gain a family’s citizenship. Love reportedly criticized families that utilized anchor babies to garner American citizenship.

Reportedly in a past interview, Love said that she was her parents’ miracle baby after being born in the U.S., giving her parents the chance to send for Love’s older siblings. According to Love, there was an immigration law in the 1970s that allowed immigrants to gain citizenship if they have a child that is born in the U.S. Some reported experts have disputed any such law ever existed.