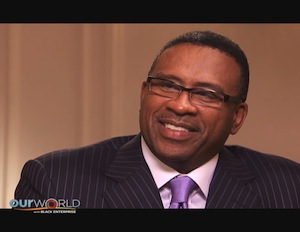 With the release of his new book The Maintenance Man II, radio personality Michael Baisden continues to raise eyebrows and attract attention. Â After first coming to the nation’s attention with his first foray into writing, 1995’s self-published Never Satisfied: How and Why Men Cheat, the Chicago native continues to tackle controversial topics with his latest work.Â Our World with Black Enterprise host Marc Lamont Hill caught up with the airwaves icon at the 2012 Black Enterprise Entrepreneurs Conference hosted by Nationwide to talk about his latest publishing venture, his love of entrepreneurship, and a new mission that makes him proud.

African-Americans make up nearly one third of all missing-person cases but seldom appear as the topic of choice on the national news. This weekend Our World goes On the Record to delve into the horrifying high numbers of people of color who go missing each year with panelists Dr. Jeff Gardere, psychologist; Derrica Wilson, co-founder and president of Black & Missing Foundation; and Larry Stackhouse Sr., whose 19-year-old son disappeared in 2005. Plus, TV One, which carries Our World with Black Enterprise, continues to shine a well-deserved spotlight on the issue with Find Our Missing. The docu-drama is designed to put names and faces on people of color who have disappeared without a trace and is hosted by Emmy and Golden Globe Award-winning actress S. Epatha Merkerson (Law & Order). Each episode tells the story of the missing, beginning with the day they vanished and the frantic searches by loved ones and investigators to find them. The series also offers a call to action and is partnered by a robust online component where viewers can learn more information and provide tips, as well as learn pointers on how to keep their families safe. The new season of Find Our Missing is slated to return to TV One January 2013.

Plus, grab a Slice of Life as Our World profiles 2004 U.S. Olympic Silver Medal winner Martiza Correia, who is spending her free time helping children learn water-safety and how to swim.

Our World with Black Enterprise airs this Sunday at 10:00 a.m. onÂ TV One and on local stations across the country.Â  Check your local listings and visitÂ www.blackenterprise.com/ourworld for additional time and station information.

Our World with Black Enterprise is the nationally syndicated television series offering a fresh mix of interviews with today’s top newsmakers and celebrities, eclectic roundtable discussions concerning the hottest topics affecting African Americans, and profiles of some of the world’s most intriguing people.