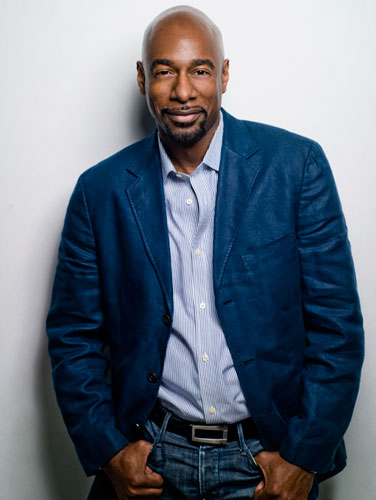 We’ve all seen the films Brown Sugar, Like Mike and Just Wright, but little did we know that the screenwriter behind those films, Michael Elliot–was once a ward of the state, a high school dropout and homeless. With no formal college education, family support or money Elliot used his pain as a catalyst for change and set out to do something extraordinary. In 1998 a Mary J. Blige song inspired his first screenplay titled Seven Days. With no agent or previous screenwriting experience, Elliot who self taught himself to write screenplays by renting movies at Blockbuster sold his first script Seven Days,which would later be called Brown Sugar, to 20th Century Fox for $250,000.

Shaped by failure, diffidence and defeat Elliot won an NAACP image award for Outstanding Writing in a Motion Picture for the film Just Wright starring Queen Latifah and Common. He has also produced films for several Hollywood studios including Walt Disney Pictures, Universal Pictures, Paramount Pictures and HBO to name a few. Most recently FOX 2000 Pictures hired him to write the sequel for the highly anticipated film Waiting to Exhale.

Elliot sat down with Blackenterprise.com to discuss how he sold his first script, lessons he learned along the way and why Tyler Perry matters.

How do you think the brutal challenges of being homeless shaped your career?

I feel like, it gives me an edge, the business is tough, the chances of success are like trying to make it in the NBA, there’s a lot of disappointment, there’s just so many reasons to quit.

Look at my career, in 2002 I had two movies come out in 90 days and my next theatrical release film was eight years later. I’ve had so many things not work out even after selling my first script, but the journey to getting to where I am and staying, it’s just so tough and there are so many reasons to quit. I’m so thankful that I went through what I went through. Â I’m proud of what I came from and I want to share my journey because I want other people to know what’s possible.

Brown Sugar (now a cult classic) was your big break. How did the idea for the film come about?

My friend came by and encouraged me to write one more script, I believe that was God. I was listening to the radio the next day and Mary J. Blige’s song “Seven Daysâ€ was on. If you listen to that song, you realize where Brown Sugar came from. She’s singing about seven days of the week but she’s also singing about a platonic friendship with a dude but something changed. On one of those days they made love and she says ‘now what are we going to do?’ I wrote that question on a napkin and that became the end of my first act.

While homeless, what valuable lessons did you learn that sticks with you now?

I feel like you have to be bold, you have to be audacious; I think that when you are bold and audacious, there’s genius in that. There’s a level of self-belief and obviously a belief in God. There was a moment for me when I realized that this business is highly subjective. I let this industry guy read my script for Seven Days [Brown Sugar] and I remember he told me to go back to the drawing board, he just thought it wasn’t good at all.Â  But this very script that this guy thought wasn’t even worth me working on, sold to 20th Century Fox.

Go to the next page to see why Elliot has high praise for Tyler Perry and what we can expect from the Waiting to Exhale Sequel.