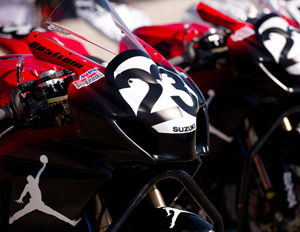 Kreig Robinson has come a long way from his days as an event marketer for America’s favorite energy drink with wings, Red Bull. Graduating from St. Louis University with a Bachelor’s degree in communications, the Missouri native took to the world of communications through community outreach and fundraising with the Mathews-Dickey Boys & Girls Club in his hometown. Little did he know that move would take his career in a new and exciting direction.

When the Los Angeles Rams relocated to St. Louis in 1995 and were in need of a practice facility large enough to hold an NFL team, Robinson helped set the up team up in the Boys & Girls Club facilities, which included two full-size gyms, two football fields, a few baseball fields and an Olympic-size pool. Several years later, his exceptional work with the sports organization led to a meeting with NBA legend Michael Jordan, who asked Robinson to join the Michael Jordan Motorsports team in 2006.

Currently serving as the racing team’s Vice President, Corporate Relations, Robinson sits down with BlackEnterprise.com to speak on his shifting gears in his career, working one-on-one with Jordan and his advice for young entrepreneurs looking to follow his track.

You’re career path to Michael Jordan Motorsports is rather untraditional. How did the opportunity to meet Jordan come about?

It’s funny. When I first came to Michael Jordan Motorsports, I had actually left Red Bull, [and started] my own marketing and promotions company that was actually servicing Red Bull and other companies like Harley Davidson and Mercedes Benz. When the Michael Jordan Motorsports thing came around, it wasn’t really a paying job, per se. It wasn’t a salary. I actually worked for the team for free, for two years to prove myself.

What did you do within that time to prove you were worthy of being VP of Corporate Relations?

We got a chance to bring the National Guard on board as a sponsor, and that really solidified my place on the team. That’s what elevated me to VP for this team.

It’s been fantastic to work with him because it’s not like going to a regular 9-to-5 where you have to find your own motivation. From a business perspective, he treats us all like friends. What’s good about that is he allows us to do what we do best, which is manage the race team and find the right people; the right sponsors; the right situations for the race team to flourish. Michael’s not a racing business expert, but he’s extremely business savvy. He has lots of companies he’s invested in out there. The guy is really on top of the business world, [and] he surrounds himself with the best and smartest people that he possibly can to make all those businesses successful. With him, you are automatically inspired because you know the type of person that he is, the type of company that he runs; so that makes you want to not be the person that drops the ball.

The world of motorsports is a far step from Red Bull and the Boys & Girls Club. What’s a normal day like for you?