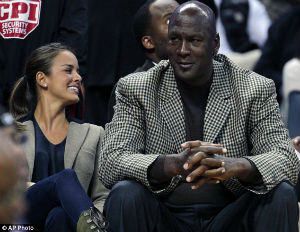 NBA All-Star Michael Jordan is about to wed 33 year-old Cuban-American model Yvette Prieto on April 27, and the Daily Mail reports that Prieto and Jordan have signed a prenuptial agreement.

Michael and Juanita had no prenuptial agreement, but after 17 years of marriage, Juanita divorced in 2006, received $168 million, their shared Chicago mansion and custody of the couple’s three children.