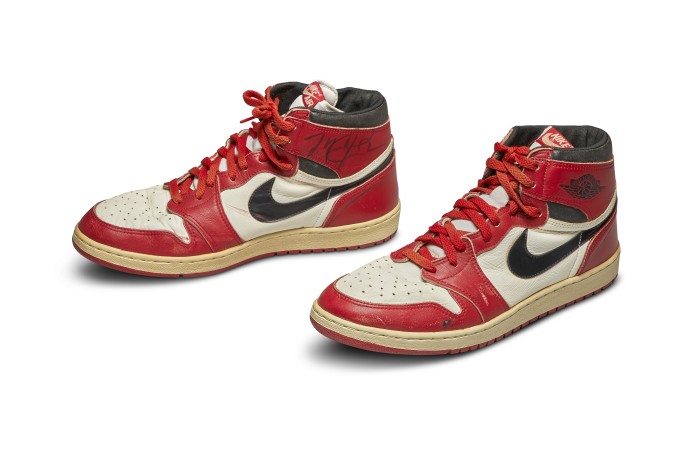 Even after retiring from professional basketball 17 years ago, NBA Hall of Famer Michael Jordan is still setting records.

Sotheby’s announced that Jordan’s first edition of his 1985 Nike Air Jordan sneakers has been sold for a record-breaking $560,000. The Game-worn autographed Nike Air Jordan 1s set the world auction record for a pair of sneakers. The previous record set at Sotheby’s for the Nike 1972 Nike Waffle Racing Flat ‘Moon Shoe’ sold for $437,500 in July 2019. The footwear sharply exceeded more than 3.5 times the $150,000 estimate.

“Building off the momentum from our debut sneaker sale last year, which previously set the record for a pair of sneakers with the Nike Moon Shoe, we wanted to set the bar even higher for our second sneaker sale,” said Brahm Wachter, Sotheby’s director of eCommerce Development, in a written statement. “We saw tremendous bidding up until the moment the sale closed, with the value more than doubling in the final hour alone. That coupled with strong international bidding from six countries on four continents shows not only the incredible appeal of Michael Jordan as one of the most recognizable and legendary athletes of all time but also that sneaker collecting is truly a global and growing market.”

During the final 20 minutes of the auction, the bidding war drove the value up by $300,000. Bidders had ranged from the age of 19 to over 50 who participated across four continents, with 70% of bidders new to Sotheby’s.

The immensely popular sneaker was so successful that Nike continued to make new signature Air Jordans each season. Even today, fans and sneakerheads around the world still flood stores and online retailers upon the release of new Air Jordans as well as reissues of previously released Air Jordans.

The allure of Jordan has been on display lately due to the much-talked-about and highly rated sports documentary, The Last Dance, that has been airing on ESPN for the past several weeks. The docu-series, which chronicles how Jordan led the Chicago Bulls’ quest to win a sixth NBA championship, also set a record, becoming the most viewed program in ESPN history after the two premiere episodes averaged 6.1 million viewers.