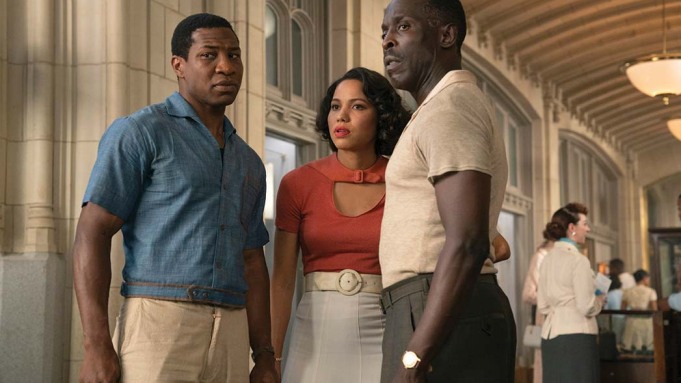 Jurnee Smollett paid tribute to her Lovecraft Country co-star Michael K. Williams on the day of his funeral with a touching Instagram post.

“My brother, my heart hurts so,” she began her social media post. “A part of my brain refuses to accept it.”

She called the “sh*tty part about grief” is that it goes in stages, starting with denial when her brother Jake Smollett called to tell her that The Wire and Boardwalk Empire alum was found dead of a suspected overdose in his Brooklyn apartment on Sept. 6.

“My brain went, ‘Hell naw, that’s not true, let me call Michael,'” Smollett recalled. “And I called him. I called him over & over until my brain said stop, he’s gone. I couldn’t breathe.”

Williams’s funeral was held Tuesday at St. Stephen’s Episcopal Cathedral in Harrisburg, Pa. It is near where his mother, Paula Williams, has lived for 20 years. The funeral was livestreamed. and there were about 175 people in attendance.

Smollett explains she is still in disbelief “taken awhile for my brain to metabolize how the world can continue to spin [without] him here in the physical form.”

Williams, who was 54, would have been to be in L.A. this week, with the Lovecraft Country cast, for the Emmys. The HBO show, on which he played Montrose Freeman and she’s Leti Lewis, earned 18 nominations. Williams received a nomination for Drama Supporting Actor while Smollett is up for Drama Actress at Sunday’s awards show.

“He was supposed to see how big Hunter is” on his L.A. visit, referring to her 4-year-old son. “We were gonna dance, celebrate, cry. Instead our brother was laid to rest today. I still can’t make sense of it. Perhaps it’s selfish of me to want to hold onto this beautiful man that came into my life and forever changed it.”

Smollett wrote about working together, and the time they shared their first scenes.

“I could feel the pain held behind his eyes, my soul understood it,” she said. “Thats the beauty of MKW’s instrument. He threw his entire being into each moment [with] such bravery and sacrifice. Thats all I needed… simply look in Michael/ Montrose’s eyes.”

But now, she says she can hear him still, “ giving me another pep talk, ‘J, get up, don’t you know you’re a f**king Queen!'” And she said she takes “comfort in knowing that you’re finally free, somewhere dancing, being mighty, showing the angels how to really get it.”

She ended with, “You still owe me that dance…& our Bulls Jerseys. I love you.”