Michael Sam Gets a Show on the OWN Network 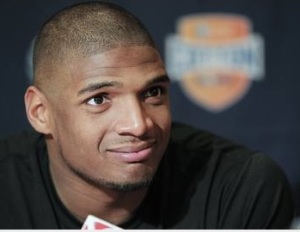 Even before making any money as a professional football player, St. Louis Rams draft pick, Michael Sam, already has an endorsement and stars in a commercial. Now add, starring in his own television program to hisÂ rÃ©sumÃ© .

The Oprah Winfrey Network (OWN) has announced that a documentary series, untitled as of now, will follow the life of Sam, the first openly gay football player drafted into the NFL.

“We are honored that Michael is trusting us with his private journey in this moment that has not only made history but will shape it forever,â€ Oprah Winfrey says.Â  “I am proud of the focus on authentic storytelling in our new documentary series format. The next real-life story we follow in, ‘The Untitled Michael Sam Project’ promises to spark valuable, important discussion on life in America today. Acceptance and illumination start here.â€