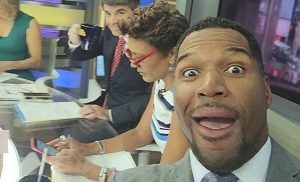 After a successful four-year run on Live with Kelly and Michael, Michael Strahan is now taking his talents to Good Morning America full time.

“My time with LiveÂ With Kelly and Michael has been transformative, and my departure will be bittersweet,” the former New York Giants star told The Hollywood Reporter. “Kelly has been an unbelievable partner, and I am so thankful to her and the entire team. I am extremely grateful for the amazing support I’ve received from all of the fans.”

[Related: Beyond the Game: Michael Strahan’s Money and Power Moves]

Since 2014, Strahan has appeared on the morning show twice a week alongside Robin Roberts, George Stephanopoulos, Lara Spencer, Amy Robach and Ginger Zee. Starting in September, he will become a full-time host on the show.

While the 44-year-old is far from new to our television screens, his outstanding career success since hanging up his NFL cleats in 2007 landed him a spot on Forbes “Highest-Paid Retired Athletes” list, earning a whopping $17 million in 2015 alone.

With million-dollar success both on the field and off, below is a breakdown of Strahan’s post-NFL career moves.

– Sports Analyst: Shortly after retiring from the NFL, Strahan followed in the footsteps of many professional athletes and became a sports analyst. In 2008 he signed a $1.5 million—$2 million contract with Fox Sports.

– Acting: In addition to appearing in commercials for Vaseline Men, Subway, and many other brands, Strahan also flexes his acting chops on the big screen. He starred in and produced the short-lived Fox sitcom Brothers, as well as played in the TV series Are We There Yet, Entourage, Black-ish and the film Magic Mike.

– Management Company: In 2011, Strahan launched a management and production company with his partner Constance Schwartz called SMAC Entertainment, where he manages artist such as Wiz Khalifa and has had a multitude of projects set-up with major networks such as HBO, AMC, ABC, and more.

– Endorsements: In 2014, Strahan became the spokesperson for the wellness product line Meta.

– Author: In 2015, the retired NFL player-turned-entrepreneur released his book, Wake Up Happy: The Dream Big, Win Big Guide to Transforming Your Life, which became a New York Times bestseller.

– Hosting: In addition to his hosting duties on Live with Kelly and Michael,Â where he reportedly made $4 million per year, Strahan has also hosted the home improvement program Backyard Stadiums on the DIY Network, the Nickelodeon Kids’ Choice Sports Awards in 2014 and the 20th Critics’ Choice awards in 2015. His new full-time job at GMA is reportedly worth a “life-changing” amount that has not been disclosed.

With all of these business ventures combined, Strahan is worth a reported $55 million. We guess that’s not too bad for an athlete who comes from an industry where 1 in 6 players go bankrupt after leaving the league.