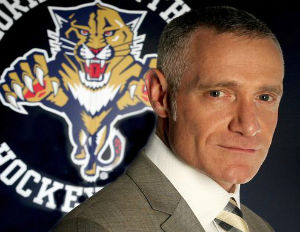 Michael Yormark, the former president and CEO of the Florida Panthers, resigned from his post Monday, leaving to become president of Jay Z’s Roc Nation Sports. The AP reports he’ll also serve as chief of branding and strategy. The Panthers promoted Rory Babich. The news was first reported by Sports Business Daily.

Mr. Yormark is the twin brother of Brett Yormark, chief executive officer of the Brooklyn Nets and the Barclays Center. “It is with a heavy heart that I write to inform you that after 11 years of incredible memories, moments and relationships, I am departing Sunrise Sports & Entertainment to open an exciting new chapter in my career,â€ Mr. Yormark said in an open letter.

“Roc Nation represents a wonderful new adventure for my family and me, and I am thrilled to join an exciting, innovative organization,â€ Mr. Yormark continued. “Roc Nation is poised to grow into one of the most influential companies in the industry, and I am looking forward to taking on this new challenge.â€

Media coverage Monday and Tuesday painted an optimistic picture for Mr. Yormark’s future going forward. Forbes says Mr. Yormark is a workaholic whose locker room experience will serve him well when it comes to relating to the athletes under the Roc Nation umbrella (ella, ella … sorry.) The South Florida Sun-Sentinel notes that Mr. Yormark had been instrumental in helping the Sunrise arena become a hotter destination for concerts and events unrelated to hockey. And biased though he may be, Brett Yormark says Jay Z and Co. made the right move.

“While we are sorry to see Michael leave, he has received an offer for a tremendous opportunity, and we are fortunate that we will be able to continue working with him in his new role,â€ brand new Panthers owner Vincent Viola said in a statement. “Rory has been working with us throughout our acquisition of the team and has been partnering with Michael on the business side and Dale on the hockey side since he joined us.â€