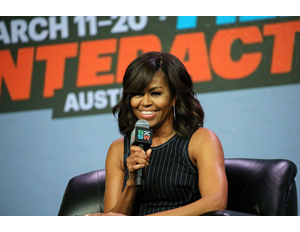 During the discussion, Obama spoke about being inspired to launch the “Let Girls Learnâ€ initiative. She said that growing up as a black girl on Chicago’s South Side, she felt that expectations of her were “limited.â€

“As I was trying to make my way and do good in school and apply to good colleges, there were always people around telling me what I couldn’t do, always telling me how far I should only dream…â€

Obama said that “doubtersâ€ can be good as they “give you strength.â€

The first lady said that there were still too many doubters of young people, especially of girls. She cited egregious cases of abuse of young women including the shooting of Malala Yousafzai for advocating education for young women in Pakistan, and of the kidnapping of 200 Nigerian girls by terrorists.

“There are 62 million young girls who are not in school around the world, adolescent girls who aren’t getting an education because there are cultural norms that keep them down.Â  They have limited recess–or resources. They can’t pay their school fees. The schools are too far. They don’t have bathrooms. They can’t go to school when they start to menstruate,â€ said Obama on why “Let Girls Learnâ€ is so critical.

Obama also spoke about using her position as first lady for doing good.

“Every day I wake up, it’s like, good Lord, please make sure that I’m being relevant, that I’m having impact, that I’m making the difference, particularly in the lives of young people.”

“To the work that we’re doing to educate girls around the world–that impacts us. I mean, you think of the world’s problems, and we know from the statistics that girls who are educated, they raise healthier kids; lower HIV rates. It can boost an entire country’s GDP, having more educated women.â€

The first lady also said that once the Obamas leave the White House, the work is not done.

“We’ve got to keep working on these issues. These are not issues that go away in a presidential term. They don’t go away in a lifetime. And why I work so much with young people is that you all are going to be the ones who take on these issues. You’re going to be the one that carries these things over the finish line–whether it’s climate change, or global education, or health and fitness…â€