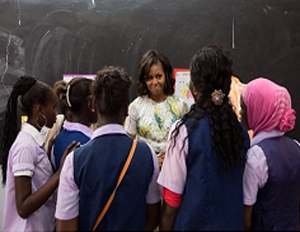 In an open letter penned for Seventeen magazine, first lady Michelle Obama stresses the need for young American girls to take full advantage of the educational opportunities presented to them.

Placing strong emphasis on the lack of resources, finances, and government support that young women in other countries get when pursuing their education, Obama begins her letter with a startling statistic stating, “Did you know that right now, 62 million girls around the world are not in school, and in some countries, fewer than 10 percent of girls complete high school (as compared to 85 percent in the U.S.)?”

Continuing to point out the advantages that young American girls have, FLOTUS elaborates on the need for young women to not take the education system and resources in the U.S. for granted. She highlights the fact that some countries are without a free public education system, causing many girls to miss out on getting a basic education because of their lack of family finances. And she further elaborates on girls being viewed as less worthy of an education than boys in some countries, leading families to exhaust their resources on educating their sons, while forcing their daughters to get married and start a family at a very young age.

Obama also details the long distance that some girls have to travel to attend school and touches on the conflict that’s taking place in Nigeria in regards to the kidnapping of more than 200 schoolgirls, further proving that her letter on the value of the American education system and the need for young girls to take advantage is right on time.

“But if girls across the globe can walk hours each day from their villages to attend school, or work two or three jobs to pay their school fees, or even risk their lives to attend school, then I know you can overcome any obstacles you face,” Obama says to young American girls toward the end of her letter.

To read the letter in full, head to Seventeen magazine.