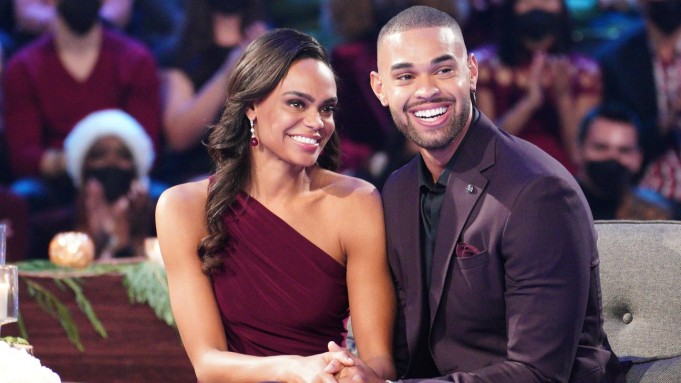 Michelle Young and Nayte Olukoya have made history as the first Black couple to come out of The Bachelorette.

The couple ended season 18 with the first proposal featuring an all-Black couple.

Young stepped into The Bachelorette focused on telling a diverse love story after becoming the runner-up on Matt James’ controversial season of The Bachelor earlier this year.

Now $200,000 richer, Young and Olukoya are house hunting and wedding planning. She couldn’t be happier to have shared the first Black love story on the hit reality show.

Despite their newfound fame as a reality star couple, Young plans to continue her work as a school teacher and use social media so her fans can “continue to see that representation and that Black love story grow.”

The season was already history-making after only men of color were in the final four. It was a major shift following Young’s season on “The Bachelor” involving James’ winner and current girlfriend, Rachael Kirkconnell who was caught in old photos attending an Old South, antebellum-themed party.

The scandal ultimately led to the departure of longtime host Chris Harrison after he came under fire for defending Kirkconnell. The ordeal reflected the deep-rooted racism in mainstream television and on the popular dating show.

Young and Olukoya’s engagement following the race scandal is a sign of the inclusion the series is working toward.

I think it’s so important. I even think about my students who are watching, and it’s a little uncomfortable, at times, when you think about the romance and that part, but also, not only seeing a black love story, but seeing a healthy, black love story is something that’s really not showcased,” Young said.