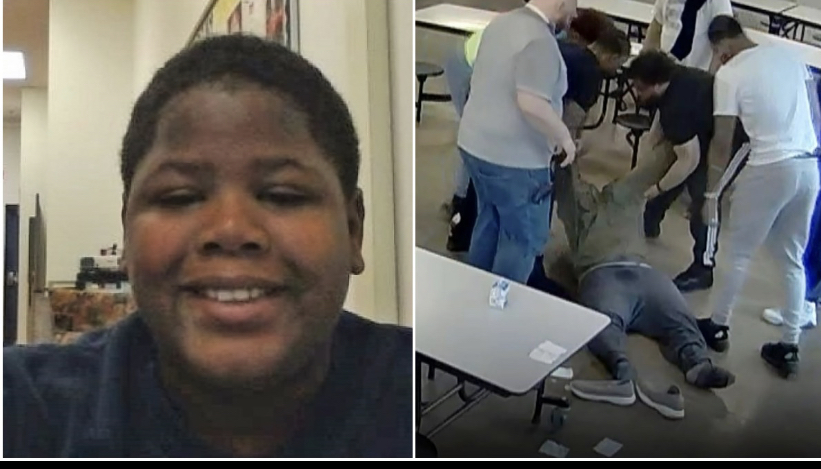 A foster care and residential treatment site in Michigan is being sued for $50 million after a Black teenager died from suffocation by staff members there.

Cornelius Frederick, 16, died after the foster care and residential home at Lakeside Academy in Kalamazoo disciplined him for reportedly throwing a sandwich. Video captured from the incident shows the teenager being tackled and restrained for 12 minutes by six to seven male staffers.

The medical examiner ruled his death a homicide.

16-year-old Cornelius Frederick died days after being restrained at Lakeside Academy in Michigan, a group youth home run by Sequel Youth and Family Services.@tvkatesnow has been investigating Sequel-run facilities and speaks to a former employee about the conditions there. pic.twitter.com/p6xCwQPFyi

Now, the estate of Cornelius Frederick is suing Lakeside Academy and 10 of its employees for $50 million.

The suit was filed on Sept. 30 by the estate’s representative, Frederick’s aunt, Tenia Goshay.

The federal civil rights claims that the facility’s “deliberate indifference, willful, wanton, and malicious actions” let to the 16-year-old being “suffocated to death by eight grown men after being thrown to the ground for the ‘crime’ of throwing a sandwich on the floor.”

According to the suit, on April 29, 2020, Lakeside staff used an “improper restraint” on Frederick and “continued to suffocate him for a prolonged period of time,” even though the teen said he couldn’t breathe, CNN reported.

Frederick suffered a cardiac arrest and anoxic brain damage. He was transported to a Kalamazoo hospital unconscious and later placed on life support. He died on May 1, 2020.

The family’s attorney, Geoffrey Fieger, told CNN the lawsuit was filed after they investigated the residential home and found it had “monetized the business of children facilities across the United States.”

In a statement released following Frederick’s death, the Michigan Department of Health and Human Services announced that it would no longer permit the use of “physical restraints” like the one used on Frederick.

“On May 1, a young man died because of restraints wrongly applied at a facility licensed by the Michigan Department of Health and Human Services (MDHHS),” Director Robert Gordon said at the time. “It was a tragedy and an outrage. We cannot bring this young man back to life, but we will not rest until we have changed the system that allowed his death.”

Gordon added that MDHHS would revoke Lakeside’s licensing as well as reforming its policies to “address challenges before they become tragedies.”